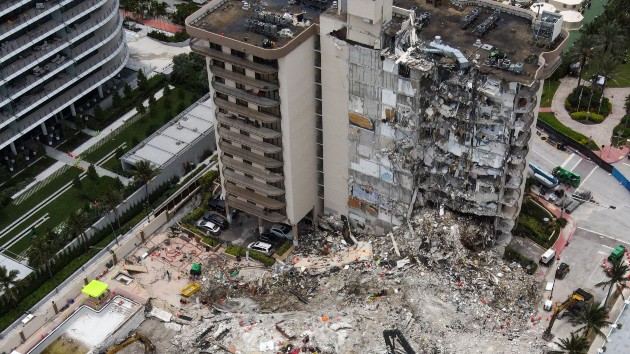 (SURFSIDE, Fla.) — At least 18 people, including two children, have been confirmed dead and 145 others remain unaccounted for since a 12-story residential building partially collapsed in South Florida’s Miami-Dade County last week.

The partial collapse occurred around 1:15 a.m. on June 24 at the Champlain Towers South condominium in the small, beachside town of Surfside, about 6 miles north of Miami Beach. Approximately 55 of the oceanfront complex’s 136 units were destroyed, according to Miami-Dade Fire Rescue Assistant Chief Raide Jadallah. Since then, hundreds of first responders have been carefully combing through the debris in hopes of finding survivors.

Meanwhile, 139 people who were living or staying in the condominium at the time of the disaster have been accounted for and are safe, according to Miami-Dade County Mayor Daniella Levine Cava, who has stressed that the numbers are “very fluid” and “continue to change.”

The massive search and rescue operation, now in its ninth day, was temporarily halted for much of Thursday due to safety concerns regarding the structural integrity of the still-standing section of the building. Movement in the pile of rubble as well as in the remaining structure prompted the hours-long pause, according to Scott Nacheman, a structure specialist with the Federal Emergency Management Agency’s Urban Search and Rescue support team.

Structural engineers, who have been on site monitoring the situation, are currently planning for the likely demolition of the rest of the condominium amid the ongoing search and rescue mission, according to Levine Cava. Nacheman, who is helping develop those contingency plans, told reporters it would be “weeks” before a “definitive timeline” is available.

The structure was cleared by crews last week, and all search and rescue resources have since been shifted to focusing on the pile of rubble. But the two sites are side-by-side and the remaining building has posed challenges for the rescuers trying to locate any survivors or human remains in the wreckage.

“Given our ongoing safety concerns about the integrity of the building, we’re continuing to restrict access to the collapse zone,” Levine Cava said during a press briefing in Surfside on Thursday evening.

Shortly after search and rescue efforts resumed Thursday evening, the Miami-Dade County mayor noted that the crews “looked really, really excited to get back out there.”

Heat, humidity, heavy rain, strong winds and lightning storms have also made the conditions difficult for rescuers, periodically forcing them to pause their round-the-clock efforts in recent days. Officials are monitoring weather systems in the region as the Atlantic hurricane season ramps up.

Although officials have continued to express hope that more people will be found alive, no survivors have been discovered in the rubble of the building since the morning it partially collapsed. Bodies, however, have been uncovered throughout the site.

President Joe Biden and first lady Jill Biden traveled to Surfside on Thursday to meet with officials, first responders, search and rescue teams, as well as families of the victims. Recalling the 1972 car accident that killed his first wife and 1-year-old daughter as well as badly injuring his two sons, the president told reporters: “It’s bad enough to lose somebody but the hard part, the really hard part, is to not know whether they’ll survive or not.”

The cause of the partial collapse to a building that has withstood decades of hurricanes remains unknown and is under investigation.