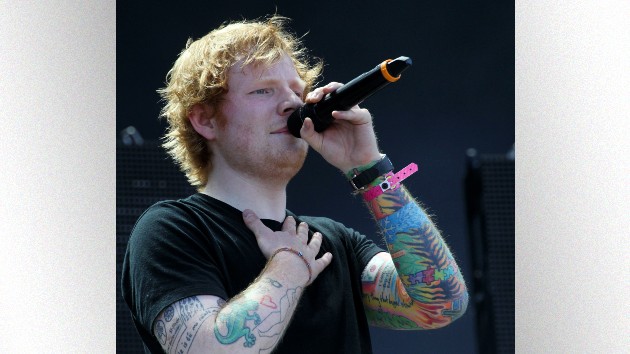 Ed Sheeran fans know that the singer’s body is his own personal canvas that he’s completely covered with tattoos. But somehow, he’s found space on his body for a couple more images to commemorate some of his recent milestones.

British tabloid The Sun quotes Ed as saying, “I got some vampire teeth on my shoulder for the [‘Bad Habits] video and an orca for Antarctica.”  Orcas, or killer whales, can be found in Antarctica; Ed and his wife, Cherry, conceived their daughter while visiting that continent in December of 2019. They subsequently named her Lyra Antarctica.

Fans first spotted the whale tattoo in an Instagram post a few weeks ago: It’s located on the underside of Ed’s left arm, above his armpit.

As for the vampire teeth, in the “Bad Habits” video, he plays a glam-rock vampire with spiky blond hair, glittery eyes and a pink suit.

Ed reportedly added about his extensive ink, “I am completely covered in the weirdest, most colorful tattoos and that is the thing no one can get their head around, apart from my wife. Everyone says I look like a melted crayon. But I love them. I love that any time something random happens, I put it on my body.”

Ed’s other tattoos include images of a Heinz ketchup logo, an enormous lion, a koala, a goat, a painting by Henri Matisse, a teddy bear, a Kiwi bird, a gecko, a pair of glasses, a cup of tea, a maple leaf, a phoenix, two characters from the Shrek movies, three boxing gloves and around 50 more.