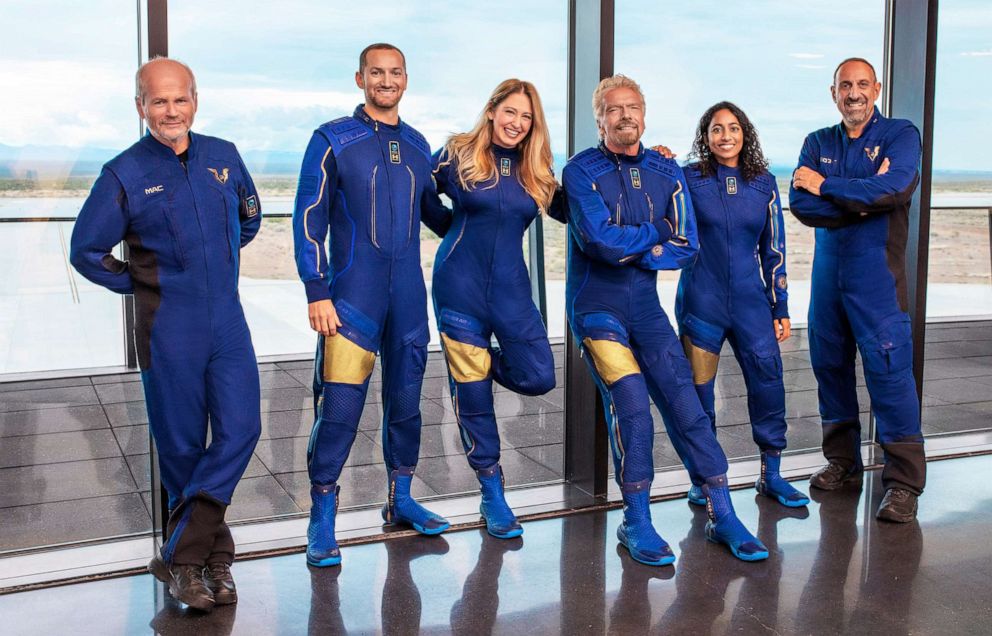 (NEW YORK) — Sir Richard Branson is set to briefly leave earth’s atmosphere on Sunday, risking it all to usher in a new era of space tourism that has been propelled by a billionaire-backed commercial space industry.

If all goes well, Branson will beat fellow billionaire Jeff Bezos — who revealed he was launching via his own rocket on July 20 — into space by just over a week. While Branson said he doesn’t see it as a “race,” his own spaceflight announcement came just hours after Bezos’ revealed he was bringing along a female pilot whose dreams of being an astronaut in the ’60s were deferred.

The two launches within ten days of each other leave some to speculate whether these billionaires are “democratizing space” as they claim, or seeking bragging rights here on Earth. Still, as with all spaceflights, swaths of viewers from across the globe are expected to tune in — and there are no guarantees of safety as the ultra-rich use themselves as guinea pigs for their space-travel firms.

Here is what to know about Branson’s trip to the edge of space, scheduled to take off Sunday morning.

What is happening and how to watch

Branson, 70, will take-off aboard the first fully crewed flight from his private space-faring firm Virgin Galactic. The spaceflight will be streamed live on Virgin Galactic’s website as well as its Twitter, YouTube and Facebook pages. ABC News will also carry live coverage of the event.

The launch will take place from New Mexico’s Spaceport America, and live coverage will commence at 9 a.m. ET on Sunday.

Branson will serve as a mission specialist on what is being dubbed the Unity 22 mission, the company’s fourth crewed spaceflight on its VSS Unity spacecraft. Branson will be accompanied into space by fellow Virgin Galactic staff: Beth Moses (chief astronaut instructor), Colin Bennet (lead operations engineer), and Sirisha Bandla (vice president of government affairs and research operations).

Pilots Dave Mackay and Michael Masucci will fly the spaceship, with C.J. Sturckow and Kelly Latimer flying the aircraft from which the spaceship will dispatch.

Branson’s role is to evaluate the private astronaut experience to prepare for future customers, which Virgin Galactic expects to do beginning in 2022.

R&B singer Khalid tweeted Friday that he will be at the launch, and debuting a new song.

The VSS Unity spacecraft launches from a custom-built “mothership” aircraft, the VMS Eve, that takes off from a conventional runway. At an altitude of approximately 50,000 feet, the spaceship will be released from the aircraft and enter its glide to the edges of space where those aboard can experience just a few minutes of microgravity, as well as novel views of earth and space. Previous test flights for the spaceship reached an altitude of 55.5 miles.

As gravity pulls the spaceship back toward Earth’s upper atmosphere, the astronauts will buckle back into their seats for reentry. Eventually, the spaceship will glide back to Spaceport America for a runway landing. Branson has said in previous interviews that the flight will take about 1 1/2 hours total.

Virgin Galactic has taken heat from critics, including the twitter account of Bezos’ firm Blue Origin, for stretching the definition of “space” as its flights do not go above the Karman line (62 miles above earth) that is defined by many — but not all — as the boundary between Earth’s atmosphere and space.

Neither Blue Origin nor Virgin Galactic’s flights will reach Earth’s orbit, however, the way Elon Musk’s SpaceX missions have. Musk on Twitter has called out this “big difference.”

The billionaires’ race to space

The modern commercial space race has been undeniably dominated by the ultra-rich. Blue Origin founder Bezos is the richest man in the world, according to Forbes data, and SpaceX CEO Musk is the third-richest. Branson’s net worth, meanwhile, is some $6 billion.

While this has led some to see space as a new frontier for billionaire daredevils, others have argued that the rise of private sector involvement in space travel has accelerated technological advancements, saved NASA money, and carries the longterm potential to open up space tourism to all who have been curious about the cosmos.

“I truly believe that space belongs to all of us,” Branson said in a statement earlier this month announcing his spaceflight. “After 17 years of research, engineering and innovation, the new commercial space industry is poised to open the universe to humankind and change the world for good.”

Virgin Galactic has stated its mission is “democratizing space” and increasing accessibility. Its initial price of tickets, however, cost $250,000. Bezos, meanwhile, auctioned a seat on his upcoming Blue Origin flight for a whopping $28 million.

As the pandemic spotlighted the nation’s wealth inequality and deepened the divide between the haves and have-nots, not everyone is rooting for the billionaires the way Americans got behind astronauts in the Apollo era. A Change.org petition calling for Bezos to stay in space has garnered headlines and more than 150,000 signatures.

Animosity was exacerbated by recent reports on how Bezos and Musk have avoided paying income taxes.

Earlier this year, progressive Sen. Bernie Sanders, I-Vt., responded to one of Musk’s tweets about a “multiplanetary” future, calling for him to “focus on Earth.”

“Space travel is an exciting idea, but right now we need to focus on Earth and create a progressive tax system so that children don’t go hungry, people are not homeless and all Americans have healthcare,” Sanders wrote. “The level of inequality in America is obscene and a threat to our democracy.”