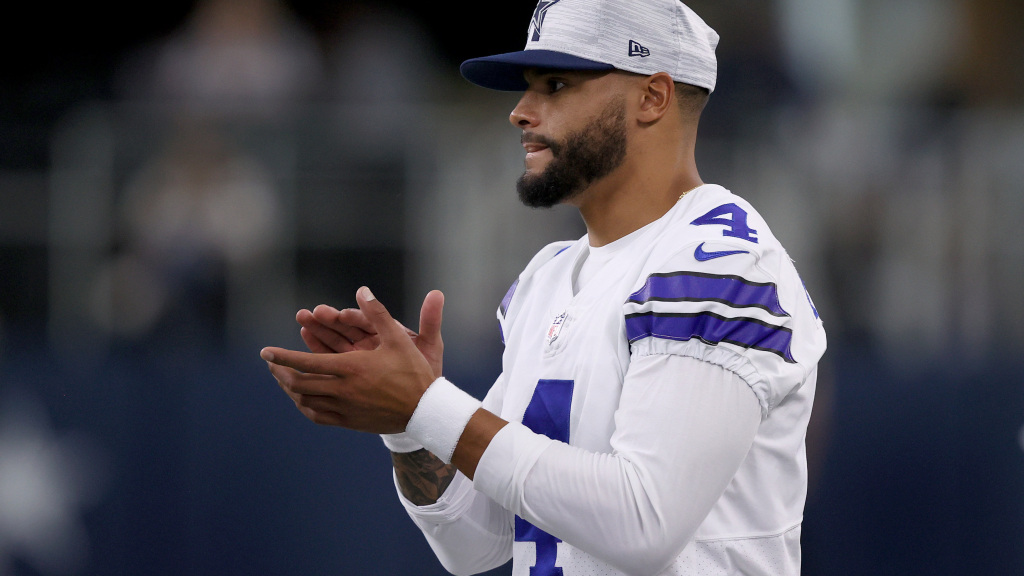 (CBSDFW.com)- The Cowboys 2020 season was essentially ended the moment that starting quarterback Dak Prescott was injured in Week 5 and lost for the season. Heading into 2021, the hope was that Prescott would be back, fully healthy, and ready to resume his torching of opposing defenses with a trio of wide outs at his disposal. But, some more concern popped up in training camp when the 28-year-old suffered a shoulder injury that kept him from playing in preseason.

NFL on CBS analyst Phil Simms said he wasn’t surprised when Prescott’s arm issue popped up because of the nature of his injury last season in which he suffered a compound fracture and dislocation of his right ankle, the leg on which he plants to put power into throws.

“When Dak came up with this lat injury that he got throwing the football, I was not shocked, I actually went on Twitter and talked about it. When that plant leg isn’t feeling right as a quarterback, you have to make some adjustments to get power on the football,” Simms said via conference call. “He changed the way he was throwing the football and when you change, the body wasn’t ready for it, put too much pressure on it and that’s what we saw.”

The former Giants quarterback and long-time analyst said he was monitoring Prescott’s throws on HBO’s Hard Knocks, to see whether he was able to get power on them when he returned to practice. While saying the quarterback looked “okay,” Simms says it’s something to monitor this season, though he does expect the week off before the opener with the Buccaneers to help with recovery.

“Fortunately, he has some time to really heal up and when they get to play Tampa Bay, he should be ready to go,” Simms said.

Prescott’s predecessor, Tony Romo, gave his thoughts on the quarterback’s return from injury as well. Romo expects Prescott will be “fine” and says that he just needs to trust himself and take things slowly. But, the one thing that he is watching for is the initial adjustment when Prescott is thrown back into live action.

“Obviously after any injury when you come back, there’s a period where, you always feel like you’re good and you’re practicing and you feel good but nothing can duplicate actually being in the game,” Romo said. “I do think there will be a slight adjustment when the plays are difficult and everything doesn’t go perfect, when you’ve played a little bit, that speed is just hard to duplicate.”

Helping Prescott in that adjustment period is the trio of weapons he has on the outside in Amari Cooper, CeeDee Lamb and Michael Gallup. Cooper in particular drew heavy praise from two of the analysts on Inside The NFL.

“He’s got it all. He’s got great feet, he’s got speed, his change of direction. If you watch his routes, he gets on guys toes and breaks them off,” said Julian Edelman, a new addition to the Inside The NFL crew this season. “But, in the system he’s in and having that relationship with Dak also helps him as well.”

Edelman’s fellow analyst on the show and fellow former wide receiver, Brandon Marshall agrees. Marshall pointed to the creativity with which Cooper finds ways to get clean releases off the line as one of the big things that makes him a special player.

“There’s one thing that jumps out when I watch film on Amari, that’s his creativity. Jules had a lot of this in the slot as well. I don’t know how the heck they found ways to run these traditional routes, these old school routes five different ways. That’s what makes Amari special,” Marshall said. “From bump-and-run coverage, press against some of the best corner backs how do you run a 15-yard comeback the way he does? How do you run a slant route the way that he does? He has five different releases for a slant route. That’s what makes him special. Then, obviously, his consistency in catching the ball. You can run all the best routes, you can be savvy. But if you can’t catch the ball, you can’t play in the NFL. That’s what makes Amari special.”

Aside from the receivers, Prescott will of course have the help of running back Ezekiel Elliott, who is looking to return to form following the worst season of his pro career in 2020. ESPN’s Football Power Index projection system gives the Cowboys the best chance of any team in the NFC East of making the playoffs (57%) and winning the division (44.7%). How Prescott heals from last year’s and this summer’s injuries will be a key in living up to those expectations.