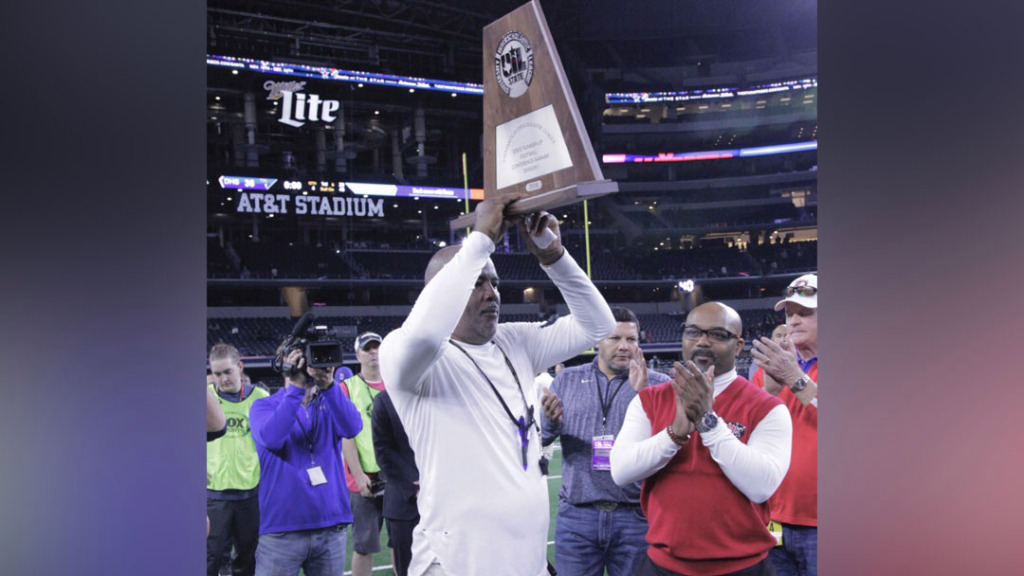 DUNCANVILLE, Texas (CBSDFW.COM) –  December 2018: A Hail Mary from North Shore High School to beat Duncanville at AT&T Stadium in the 6A state championship game left Panthers head coach Reggie Samples on the wrong end of one of the most famous endings to a Texas state title game.

It would’ve broken some, but only made him stronger.

He says “people have a lot of respect for how you handled things or it could’ve been a bad situation. It was bad enough as it was. We didn’t need to make it any worse”.

Now, one win away from 300 for his career, he’s already the winningest African American football coach in UIL history, but that’s not how he wants to be categorized.

Samples has always stood for something that goes way beyond victory ever will.

His goal has always been “to develop young men and hopefully help them have a path to success when they finish playing football”.

It was Samples’ middle school coach who did that for him.

That’s why he calls the photo of him on the team with that coach his most prized possession.

Coach Samples said his father wasn’t a part of his life and that’s why he’s willing to whatever role necessary for every young man who takes his field.

He says “I wear that father hat. I wear a police hat. I wear a minister’s robe”. “When you lead, you also have to show a little love”. “And, in order to do that you have to care about them”.

Some have called him The Godfather of North Texas football. Now you know why.

Fantasy Football Start Or Sit Week 2: Is Aaron Rodgers Due For A Big Bounceback Game?