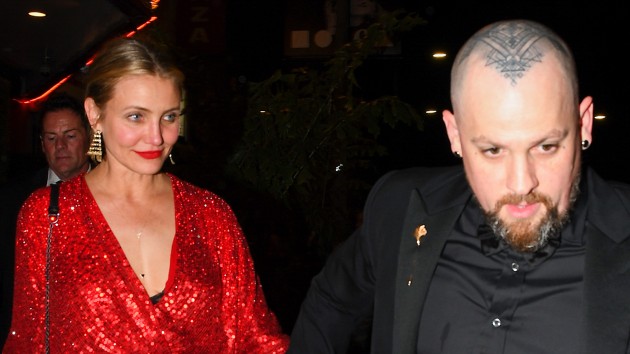 In a rare new interview, Cameron Diaz opened up about her love of husband Benji Madden and whether or not she confuses him with his twin brother, Joel Madden.

“They’re not the same, they’re so different,” the 49-year-old actress laughed when appearing on the Anna Faris Is Unqualified podcast﻿ on Monday. “Even though they’re twins, they’re very, very different obviously.”

Diaz then revealed the thoughts that went through her head when she first met the ﻿Good Charlotte rocker, hinting that she knew then and there that Benji was the one.

The Charlie’s Angels star said she met her future husband through her now sister-in-law Nicole Richie, who is married to Joel.

“I met [Benji] through my now sister-in-law and brother-in-law, I met them first and then they didn’t set us up but we were in the same room because of them,” said Diaz. “And then we found each other.”

The actress-turned-wine-mogul continued, “I was like, ‘How come I didn’t see him before?"”

Diaz hinted that Benji landed on her radar even before their fateful first interaction, adding that she clocked him when he was heading in her direction.

“I saw him walking towards me and I was like, ‘Huh, he’s hot, I haven’t seen him before,"” she laughed. “But then when I saw him, like who he was, that’s what made me really be like, ‘Oh you, you’re special, you’re the guy, you’re the hidden gem in my life."”

Halyna Hutchins, cinematographer killed on the ‘Rust’ set, was a “rising star” in the film world

“Are they kidding?” William Shatner still can’t believe they used his face for Michael Myers in ‘Halloween’