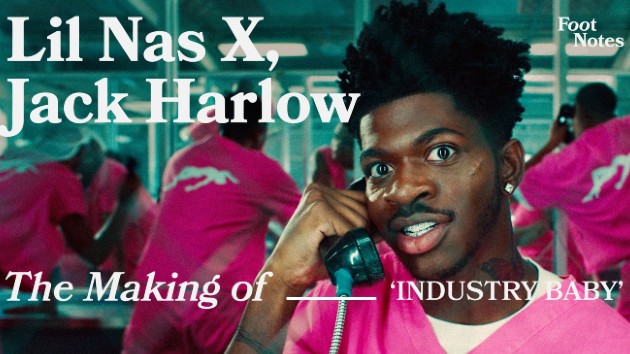 Lil Nas X‘s instantly controversial video for “Industry Baby” has gotten the VEVO Footnotes treatment: You can now watch the making-of feature, complete with behind-the-scenes information and commentary from both the rapper and the clip’s director.

Here are just some of the things you can learn about the clip from VEVO Footnotes:

–The video, in which Lil Nas X and Jack Harlow break out of “Montero State Prison,” is “essentially a giant metaphor to represent Nas’ unwillingness to conform to the industry standards or be caged in because of his beliefs,” explains director Christian Breslauer.

–Lil Nas X chose the prison setting because he wanted “to go to a place people would least expect me to go in a music video. An overly masculine place and make it gay asf.”

–The Grammys you see in Nas’ jail cell are the actual Grammys he won for “Old Town Road.”

–The security guard who gets punched by Nas is Colton Haynes, one of the stars of the Teen Wolf TV series.

–Lil Nas X’s favorite scene isn’t the nude shower dance sequence: It’s the part where everyone is dancing together in the prison yard.

“The song felt like a victory lap… but also an underdog anthem, and that’s what I wanted the lyrics to reflect,” the chart-topping rapper says of “Industry Baby.” “I wanted a song to remind people I’m not going anywhere.”