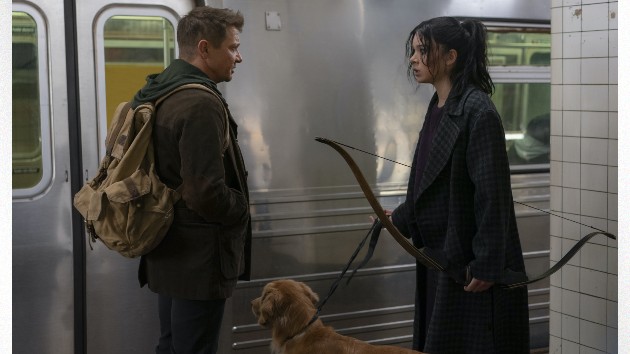 Disney+ has announced that it will launch its latest Marvel Studios project, Hawkeye, with a double-episode premiere on November 24 — and co-star Hailee Steinfeld can’t wait.

“I mean, I still am comprehending the fact that I’m even a part of it,” she tells ABC Audio with a laugh.

“I’m still…trying to form a sentence about it,” says Hailee, who plays Kate Bishop, the protégé of Jeremy Renner‘s Clint Barton/Hawkeye.

As previously reported, the show centers on Barton as he balances family life with the ramifications of his vigilante days, as seen in Avengers: Endgame. Caught in the middle is eager archer Kate.

A new extended teaser presents more of the action and comedy in the series, which is set in New York City during the holidays — and shows more of an already-memed peek of the fictional Rogers: The Musical, about the life of Captain America featuring his heroic pals.

As fans eagerly await the premiere, so is Hailee. “[I]t’s been such a dream,” she says, adding, “You know, to be a part of the MCU is again very hard to comprehend, but a true honor. And I’m so excited for the world to see this show and meet Kate Bishop.”

Until then, the Dickinson star and producer can be seen on November 5, when the third and final season of that acclaimed show gets underway on Apple TV+.