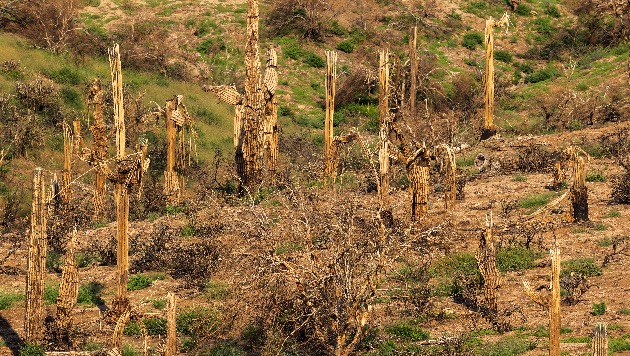 (NEW YORK) — Over the last several years, cases of valley fever, a disease common to the arid West, have been steadily creeping up.

Now, experts believe the disease may spread to other parts of the country, and it may be due to climate change.

“I have talked to some people that the cases are over the usual numbers,” Dr. George Thompson, a professor of medicine at UC Davis, said. “We’re probably up 30% [in my practice].”

Valley fever, or coccidioidomycosis, is caused by the coccidioides fungus and can manifest as a primarily respiratory illness that self-resolves, or as a more severe, systemic condition that requires immediate medical attention.

The more severe version, disseminated coccidioidomycosis, affects 5-10% of infected people and can affect the skin, joints, heart and even the brain and spinal cord. Once those areas are impacted, the disease can be difficult to treat, particularly in immunocompromised individuals.

The coccidioides fungal spores commonly reside in soil throughout California, Arizona, Nevada, New Mexico, Utah, Texas and as far north as Washington. Any disturbance of the dirt, such as construction work and burrowing animals, can send plumes of coccidiodes spores into the air, where people can inhale them.

While valley fever is historically endemic to the hot and dry southwestern United States, experts are concerned that the fungus may be on the move due to ecologic and environmental changes, among other factors.

“There’s a bit of seasonality … it’s multifactorial. There’s no question there’s been a strong, steady increase,” Dr. Andrew Comrie, a professor of climatology at the University of Arizona, told ABC News.

Improved surveillance and diagnostic methods may be catching more valley fever cases than before, but experts believe the recent rise in known cases is, in some part, a result of changing global climate trends.

So far, research based on predictive modeling has shown that changing climate patterns may lead to coccidioides spreading as far east as Kansas and as far north as North Dakota.

These models are based on trends seen in precipitation and temperature: two factors critical to the lifecycle of the fungus responsible for valley fever.

Projections show that average annual temperature may increase by 3-6 degrees by the end of the 21st century, and rainfall is predicted to decrease further in the western and southwestern U.S. — setting up more ideal environments for coccidiodes to spread.

But climate change might not be wholly to blame for the fungus’ spread.

“It’s a lot hazier than we would like it to be,” Comrie said.

Predictive modeling can only provide part of the story based on estimates, and there is inherently a time lag between when a patient is diagnosed with valley fever and when that person was actually exposed to the fungus.

Comrie also pointed out other theories, debunking one myth in particular, which sets duststorms as the enemy. Duststorms — gigantic walls of loose dirt — commonly blow through Arizona, and people may worry that toxic fungal spores are released in the air along with the dust. However, Comrie wants to dispel that fear (overall, Valley fever appears uncorrelated with duststorms as a whole) and instead focus on rodents as potential vectors for valley fever. Burrowing mice, for example, easily disturb the soil layer where the coccidiodes fungi sit, increasing the risk of dissipating the dangerous spores.

“More disturbances means more infections,” Comrie said, which in turn means more attention needs to be given to valley fever, as experts believe it will only become more common in the country as the environment changes.

“A lot of primary care doctors are going to be the first ones to encounter the disease,” Thompson said. “It’s important for patients to know whether they need to get tested for coccidiodes.”