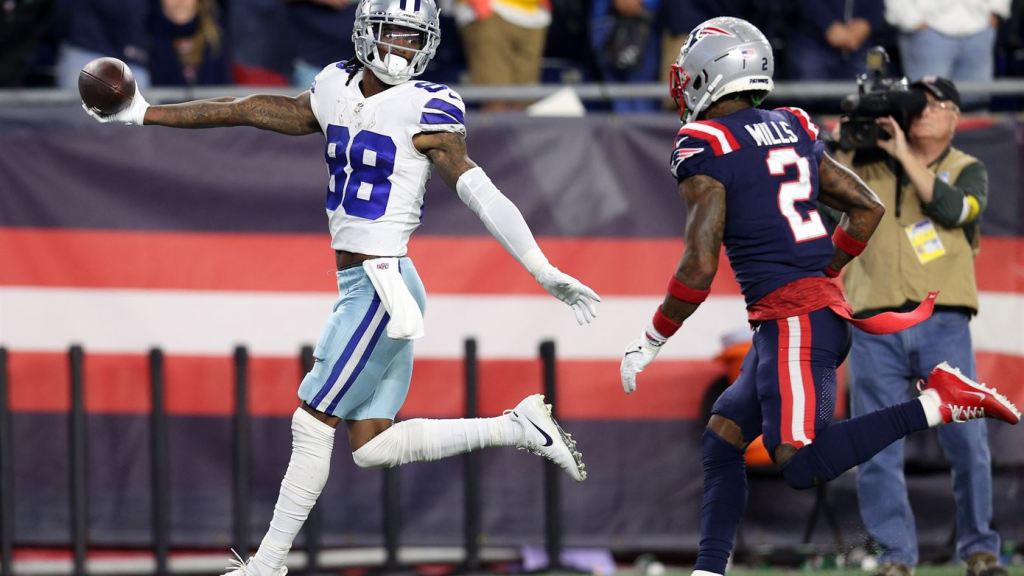 Dallas hadn’t won at New England since 1987 and was 0-5 against Bill Belichick. The Cowboys (5-1) have won five straight, their longest winning streak since 2016.

CeeDee Lamb #88 of the Dallas Cowboys celebrates after catching the game winning touchdown against Jalen Mills #2 of the New England Patriots in overtime on October 17, 2021 in Massachusetts. (credit: Maddie Meyer/Getty Images)

The Cowboys led 17-14 entering the fourth quarter, and that’s when the fun began. The teams traded five scores in the period, three in the final 2 1/2 minutes.

New England (2-4) was clinging to a 21-20 lead when sensational Cowboys cornerback Trevon Diggs intercepted Mac Jones and returned it 42 yards for a touchdown — his seventh pick and second pick-6 of the season — to put Dallas ahead 26-20. On the next play from scrimmage, Jones hit Kendrick Bourne for a 75-yard score. Jones hooked up with Jakobi Meyers for the 2-point conversion.

Bottom part of the video. #DallasCowboys #Dak has a boot on his right foot as he does his press conference. He says he’ll be fine. Also says Life keeps throwing punches he keeps throwing them back and the boot is more of a precaution. #HOPESO @CBSDFW CBSDFW @CBS11Sports pic.twitter.com/dSVbRhBbOq

But Prescott led the Cowboys on a 40-yard drive and Greg Zuerlein’s 49-yard field goal sent it to overtime. Dallas ended it after New England punted on its first possession as the Patriots dropped to 0-4 at home for the first time in Belichick’s 22 years as coach.