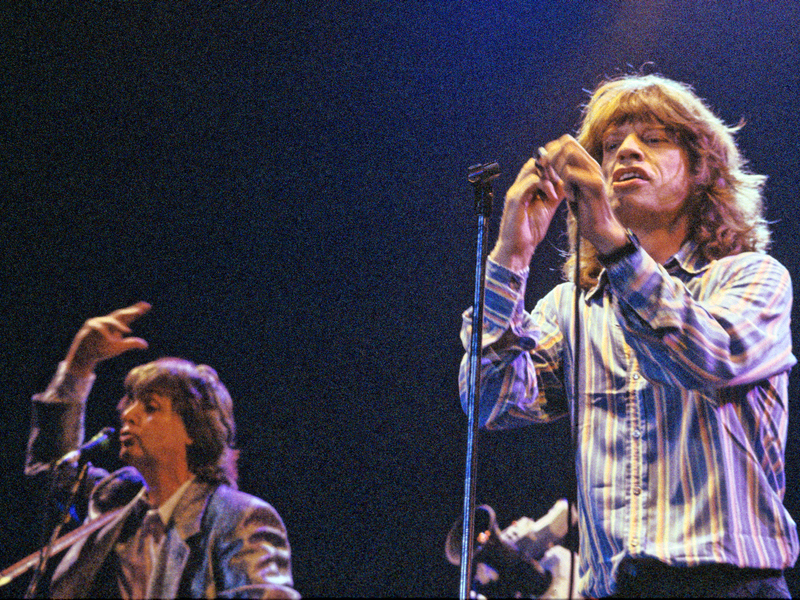 Mick Jagger took a swipe at Paul McCartney on Thursday night (October 14th) during the Rolling Stones' concert at L.A.'s SoFi Stadium. Jagger was commenting on the former-Beatle's recent take on the Stones to The New Yorker, when he offered up, "I'm not sure I should say it, but they're a blues cover band, that's sort of what the Stones are. . . I think (the Beatles') net was cast a bit wider than theirs."

While chatting with the crowd at the Stones gig — Jagger couldn't help but poke "Macca" when he said, "There's so many celebrities here tonight, of course, y'know? Naturally. Megan Fox is here, she's lovely. Leonardo DiCaprio, Lady Gaga. Kirk Douglas — aah, misread that one. Uh, Paul McCartney is here; he's going to help us — he's going to join us in a blues cover later." Charlie Watts' replacement, Steve Jordan, looked at Jagger with a smile as if to say, "Really???"

Back in 2005 when the Stones performed as the Super Bowl's halftime act the year after McCartney, he echoed John Lennon's 1970 statement that the Stones did everything the Beatles did — exactly a year later: ["It's not bitchy, but if you look at the career of the Beatles and the Stones, they always do stuff a year after we do. So we do Sgt. Pepper and about a year later they do Satanic Majesties, they do their psychedelic album. The Beatles come to America, about a year later the Stones do. So I like it. They're holding true to form."] SOUNDCUE (:18 OC: . . . true to form)

McCartney didn't want to take the Stones to task too much, however: ["It's all a bit of fun, really, y'know, that's the main thing. As long as everyone's enjoying themselves, and the audiences are, so it's good enough for me."] SOUNDCUE (:06 OC: . . . enough for me.)

Mick Jagger admitted that the Beatles' opened all the doors for the Stones by recreating the music business in the early-'60s: ["They were both rivals and they were also, I mean, they were also showing the way, 'cause they were the first at this kind of. . . They were kind of trailblazers in a lot of ways, and they went to the United States first, y'know, they showed the way, they were big international stars — because in England, most people have never really been stars outside of England. You had your little patch and that was it. And the Beatles kind of showed you could be big internationally."] SOUNDCUE (:29 OC: . . . be big internationally)

Mick Jagger On The Beatles’ Influence :

Paul McCartney Says The Rolling Stones Have History Of Following In Beatles Footsteps :