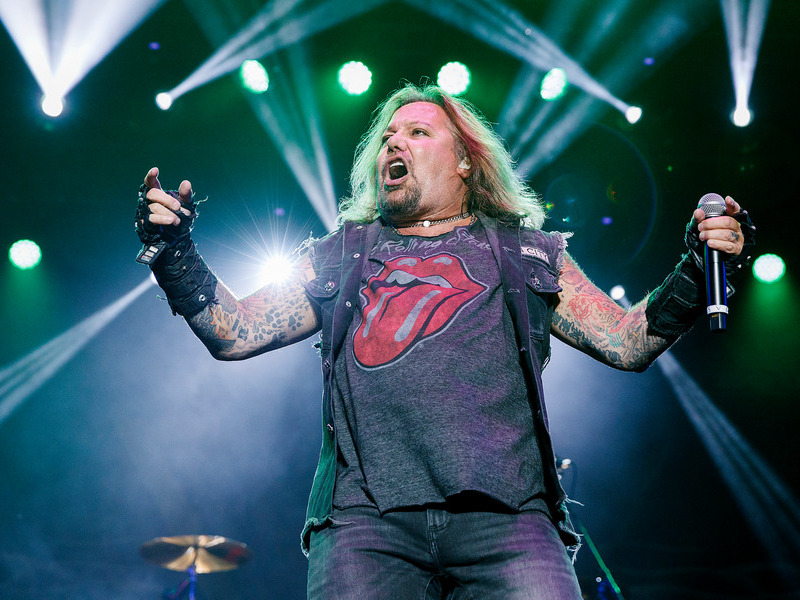 During a solo show on Friday night (October 15th), Mötley Crüe frontman Vince Neil fell off stage and ended up breaking several ribs. Billboard reported that a few songs into the set at Pigeon Forge, Tennessee's Monster on the Mountain Festival, Neil was trying to get the crowd to clap along to Crüe's 1989 hit, "Don't Go Anyway Mad (Just Go Away)" and didn't see the gap between a speaker and the stage and fell four feet onto the hard cement. Neil's backing band continued playing after the accident with guitarist Jeff Blando handling lead vocal duties.

Neil’s bassist Dana Strum told the crowd: "The truth is Vince fell and broke ribs when he fell. He can’t breathe and he’s gonna get dealt with medically. He was so excited to be here. He lives in Tennessee. But he was willing to stick it out and tough it out when the people back here were telling him 'Don’t do it.' Let’s have one good round of applause, please, for this guy."

On Sunday (October 17th) a message was posted to fans on Mötley Crüe's social media, stating, "Vince is back home and resting after breaking a few ribs on Friday night. Our love and best wishes for a speedy recovery and ready to rock in '22!!"

When we last caught up to Vince Neil he told us that performing is the lifeblood for any rock artist: ["Touring is the heart and soul of rock. I mean, it's why we all do this. I mean, you feed off it. There's been nights when I haven't slept in days but the second you hit the stage, adrenaline just gets pumping and you forget about everything and just get in a zone and you just sing and it's just like hanging out with the crowd. It's cool."] SOUNDCUE (:15 OC:. . . crowd it's cool)

Motley Crue’s Vince Neil On Touring Being The Soul Of Rock :