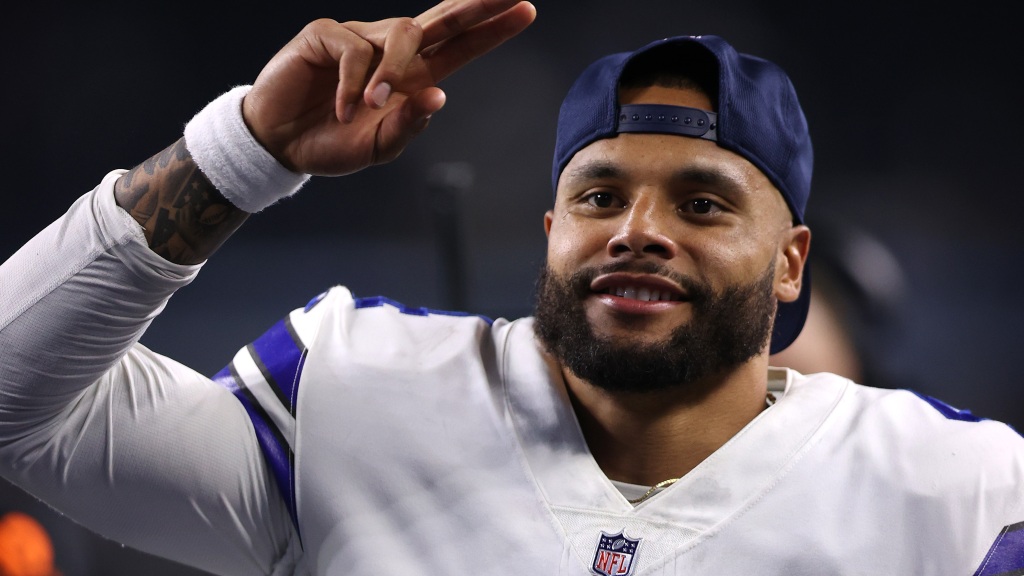 FRISCO (CBSDFW.COM/AP) — Dallas Cowboys quarterback Dak Prescott is promising not to miss any time after straining his right calf on the overtime touchdown pass that gave the team their first win at New England since 1987.

Prescott believes he can deliver on that vow because the team is going into its open week. Even with the break, recent history with his teammates suggests his view is optimistic.

Receiver Michael Gallup hasn’t played since the opener because of a calf strain. Four-time All-Pro Zack Martin missed the final five games last year after playing through one. He was injured in practice and aggravated the strain 10 days later, in the second game since the injury.

Walking off at 5-1 with a boot on his right foot #DallasCowboys #Dak has to know all of #DFW is just as optimistic as he is… that it’s nothing serious @CBSDFW @CBS11Sports pic.twitter.com/hGtMHW0nf1

Prescott needed help getting to the locker room after the dramatic 35-29 win over the Patriots and wore a walking boot to the postgame meeting with reporters. Coach Mike McCarthy said an MRI confirmed the strain Monday, and he is optimistic about Prescott playing at Minnesota on Oct. 31.

“I’ve got a lot of confidence in myself and the medical team, and as I said I feel good,” Prescott said after the game. “This (the boot) is a precaution. Didn’t hurt as bad obviously when you score and win the game.”

The injury is in the same lower leg that needed two surgeries after Prescott’s season-ending compound fracture of his right ankle in Week 5 last year. Prescott said he didn’t know if that was any more reason for concern.

Prescott had 445 yards passing, the most the Patriots have allowed under coach Bill Belichick, playoffs included. The Cowboys also had the most total yards against New England in the Belichick era with 567.

If there were any lingering questions about whether the Cowboys (5-1) have one of the best offenses in the NFL, there aren’t now.

They were playing the same way, but had a losing record when Prescott got hurt last year. The difference for the NFC East leaders, who have five straight victories, is an opportunistic defense that’s second in the league with 14 takeaways.

“We know we’re for real,” said Prescott, the first Dallas quarterback with at least three TD passes in four consecutive games. “I don’t think we’re out here trying to send a message to anybody, more so than we’re showing it to ourselves.”