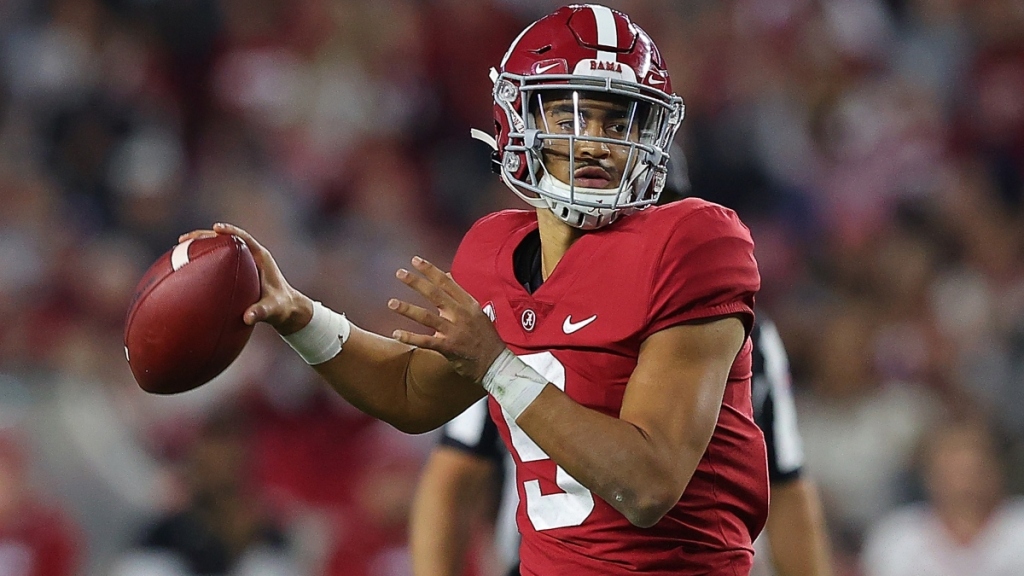 (CBS DFW) — The college football regular season ends this weekend, with plenty of conference titles still hanging in the balance. Bowl games and the College Football Playoff, of course, will follow, with bids still possibly riding on this weekend’s action.

CBS and CBS Sports Network have another strong slate of college football action scheduled for the long holiday weekend. Third-ranked Alabama meets Auburn in the Iron Bowl this Saturday. Arkansas, ranked 25th, takes on Missouri in more SEC action. Boise State faces #22 San Diego State, with a spot in the Mountain West Championship potentially on the line. And UNLV hopes its late-season surge can carry it over Air Force. CBS’s Norm Elrod talked to CBS Sports’ Aaron Murray about the matchups.

Auburn has lost three in a row. And they’re without quarterback Bo Nix, who suffered a broken ankle in the Mississippi State game, ending his season. Can Auburn keep up with third-ranked Alabama, or do you see the Tide rolling away with this one?

I see the tide rolling away. Obviously, for Auburn, this is a huge rivalry. We know things get really crazy, especially at Jordan-Hare, their home stadium. I just don’t think they have enough firepower on offense. They really lack consistency at the receiving position this year. Started off a little bit sluggish, got a little bit better toward the middle of the season. They decided to part ways with their receiver coach. They have regressed these past couple weeks at that spot.

Tank Bigsby has been kind of up and down. The offensive line has been up and down. And obviously they lost their starting quarterback. It’s just rough sledding right now, for that team. I think they’re a little bit demoralized, especially the way they’ve lost these past couple weeks. Being up big on some teams, they were up on Mississippi State. They came back and won that football game. You’re up 14-0 on South Carolina. South Carolina came back and won. So it’s been a tough three weeks. I’m wondering if they’re lacking some confidence at the moment. TJ Finley is a good quarterback. I just don’t think he’s good enough to beat the number-two team in the country.

Alabama, what can you say? Offensively, they are juggernauts. Bryce Young is top-two guy for the Heisman right now. He’s had the opportunity the past two weeks to make a case for it, with this game, the championship game. A lot of speed at receiver spot. And I like their defense. I went back and watched the game versus Arkansas. And Arkansas really couldn’t do much in the first half. And it was just a couple really well placed balls from the quarterback, great coverage just better-thrown football. And Arkansas also made some big plays down the field to really narrow that gap a little bit in the football game. So Alabama, I think they take care of business versus Auburn.

25th-ranked Arkansas has won three straight and stayed with Alabama last week. Missouri has generally held its own this season, except against ranked competition. Will they be able to hang with Arkansas?

I hope so, because I’m on the call for the game. Football game. Connor Baselak is one of my favorite quarterbacks in the SEC, dating back to last year. He’s been a little bit banged up at times this year. He’s been a little bit loose with football, too many turnovers. But, overall, he’s a talented thrower of the football. They do lack a top receiver on the outside to make his life a little bit easier. But Tyler Badie is one of the premier backs in the country. Badie is an absolute stud. I like their offensive line. They run a great stretch scheme, where he has tremendous vision of either hitting it inside, bouncing outside. So Arkansas is going to have to slow down Tyler Badie.

Defensively, they’ve gotten a lot better here the past couple weeks. They’re tackling better in space. They’re making plays. They’re getting after the quarterback. And that’s really what’s been the biggest difference in them winning over South Carolina, and then winning versus Florida is stopping the run, making tackles, all that good stuff. So this is a determined Missouri team that is playing with a lot of confidence right now.

Arkansas, I love I love Coach Pittman. I love their staff. They have fun. Their defensive scheme is an absolute nightmare to go against, especially if you want to try and throw the football. Obviously, Alabama did their thing last weekend, but that’s that’s Alabama. It’s hard for anyone to slow those guys down. But what they’re doing on that side is pretty darn good. They have a lot of seniors that came back this season, to make it a special year. Senior night, you know those guys are going to be playing extremely tough, extremely hard.

KJ Jefferson has really improved a lot this year. And obviously Burks is one of the better receivers in the SEC. So I think it’s a pretty good matchup. Arkansas is maybe a little bit better football team. Missouri is definitely playing with confidence. Defense has improved.

Boise State and 22nd-ranked San Diego State both bring winning streaks and two of college football’s better defenses into this matchup. Both teams also still have their eyes on the Mountain West Championship. The Broncos are slightly favored on the road over Aztecs. How do you see this one playing out?

I kind of like the Broncos. I’ve had the chance to cover both these teams. I covered Boise State three weeks ago versus Fresno. And I covered San Diego State twice this year. San Diego State is very similar to what we just talked about with Arkansas and what they want to do defensively. Very tough on that side. They play fast, they’re physical, they fly around the football, tremendous scheme. And they run the ball. Greg Bell is an absolute beast. The interesting thing with them is the quarterback position. They’ve been rotating guys left and right. I think they’ve found their guy in Johnson. He’s good, decent thrower of the football.

Boise State is the more complete team. I think they’re playing great defensively at the moment. They’ve been absolutely on fire since the loss to Air Force. They they put it to Colorado State. They held Fresno to 14 points, and Fresno is one of the best offenses in the Mountain West. They held Wyoming the 13 points; you saw what Wyoming did last week versus Utah State. And they held New Mexico to no points at all. Soon that side of the football, they’re playing the best the’ve played this year. And I think Hank Bachmeier and Shakir are just absolute dynamic playmakers when it comes to a quarterback-receiver combo. So I’m going to give the slight edge to Boise, just because I still don’t really trust San Diego State and their ability to score points.

Air Force is tied for the lead on the Mountain side of the Mountain West. And they still have a shot at a spot in the conference championship. UNLV has come on of late. But sitting last in the West, they’re simply playing for pride at this point. Will Air Force and its triple-option run all over UNLV?

Yes, Air Force is one of the best teams in the Mountain West. Obviously look at the record, 8-3, 5-2 in the conference. I had their game a couple of weeks ago against Colorado State. They’re nasty. They’re another team that’s just playing well on both sides of the football. Defensively with Jordan Jackson up front coming back. Meeks and Mock, and the backend with Bugg and both Taylors. Very good defense, a tremendous defense.

Obviously, we know what they can do offensively. Daniels has had a good year at he quarterback spot. Brad Roberts is an absolute beast at fullback. And they can throw the football. They’ve proven this year that they’re not afraid to throw it down the field. Brandon Lewis is a heck of receiver, tremendous stop-and-go ability. Can take the top off a defense. Kinamon does a great job as well. So I just think, when you look at Air Force, they’re playing with a lot of confidence. They’ve had some really big wins as of late. Even their losses were games they probably could have won. Versus Army, they could have won that game. And San Diego State, they were up by like six points. They beat Boise State,. They put it to Colorado State. And then a big win in triple-overtime versus Nevada. So I just love this Air Force team. I think they’re complete. I think they take of business at home this weekend.