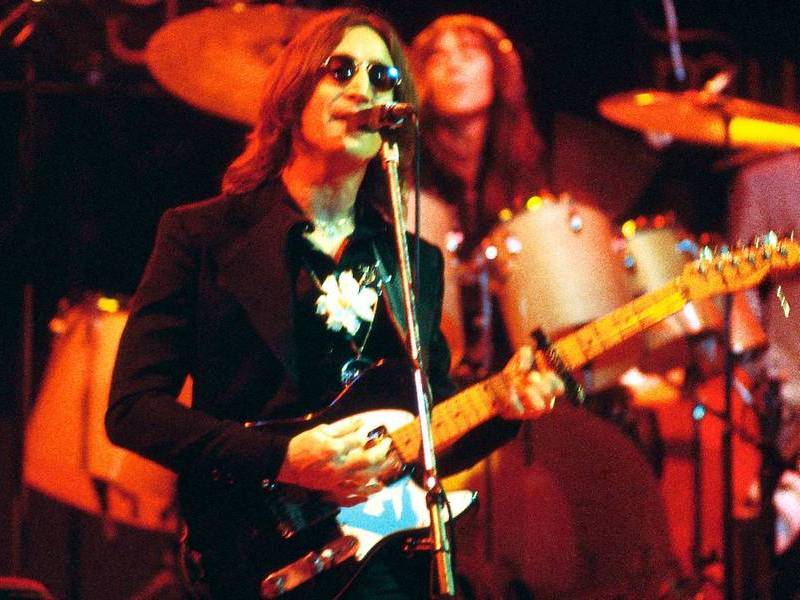 It was 47 Thanksgiving's ago (November 28th, 1974) when John Lennon joined Elton John on stage for a brief set of songs at New York's legendary Madison Square Garden. Lennon's appearance happened due to a bet made with Elton earlier that summer when Elton supplied the piano and harmony vocal on Lennon's "Whatever Gets You Thru The Night." Elton made Lennon promise that if the song hit Number One he would join Elton onstage to perform it. Lennon, who had yet to have a U.S. solo chart-topper, never believed the song would hit the top spot, and agreed. When the song hit Number One, plans were made for Lennon to make a guest appearance at Elton's New York City show.

Lennon reportedly got cold feet after traveling to Boston and catching Elton's Boston Garden show, but was talked into honoring his commitment. Only two days before his death, Lennon recalled the entire back-story to his brief stage comeback to BBC Radio: ["Elton was in town and I was doing it and needed the harmony. He did the harmony on that and a couple more, and played beautiful piano on it. And jokingly, he was telling me he was going to do this Madison Square Garden concert — he said, 'Will you do it with me if the record's Number One?' And I did not expect it to get to Number One at all. I didn't think it had a chance in hell. I said, 'Sure, sure, sure I will.' He came back and said, 'OK, it's time to pay your dues!' It was the first Number One I had, actually. 'Imagine' wasn't Number One, 'Instant Karma' wasn't Number One — which I all think are better records than 'Whatever Gets You Thru The Night.' (The) words are pretty good. But anyway, so what could we sing, that was the point."] SOUNDCUE (:34 OC: . . . was the point)

Elton John, who shared a music publisher with the Beatles starting as far back as 1967, didn't meet and become friends with John Lennon until late-1973. Elton shed light on their unique friendship: ["We got on like a house on fire and we hung out for a couple of years; I found him very kind, very funny. I don't know why we clicked, but we did and he clicked with my band and he clicked with the people around me. And we had so much fun. I was quite intimidated by him, because I knew he was razor sharp and could be very abrasive. But that side never came out with me — only the kind side and the funny side."] SOUNDCUE (:19 OC: . . . the funny side)

Toward the end of Elton's New York City show, Lennon was announced, dressed all in black and playing a black and white Fender Telecaster as he, Elton, and the band launched into "Whatever Gets You Thru The Night"; the Beatles' "Lucy In The Sky With Diamonds," which he and Elton had re-recorded earlier that year and was Elton's current single; and the early Beatles classic "I Saw Her Standing There," a Paul McCartney-sung track that Lennon had never performed after the group's split.

Amazingly, the MSG performance was NOT the first time that Lennon and Elton had taken the stage together. On November 30th, 1973, the self-admitted inebriated pair joined Dr. John onstage at L.A.'s Troubadour for a pair of songs — "Cold, Cold, Cold" and "Mama Don't Know." Although photos exist, to date, no audio of the one-off team-up has been discovered.

BBC – John Lennon On ‘Whatever Gets You Thru The Night’ :

John Lennon’s son Julian says watching ‘The Beatles: Get Back’ “has made me love my father again”