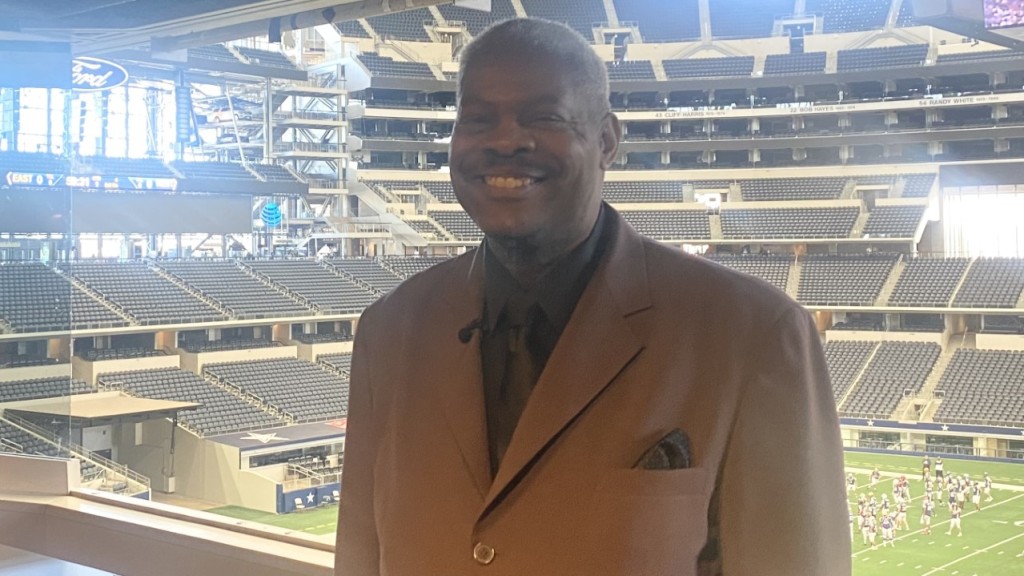 ARLINGTON, Texas (CBSDFW.COM) – Meet the man who can unlock any and all doors at AT&T Stadium, Phil Whitfield.

Whitfield says, “I actually got the keys to Jerry World. We’re just going to have a little fun and that’s all this is all about.”

Whitfield is a Dallas native and graduate of DISD’s Roosevelt High School.

He’s been a Cowboys employee for the last 29 years, during which the franchise won its last two of five Super Bowl titles.

Whitfield says, “When Prescott is throwing the ball, those other guys may not want to catch it, but I wanna catch it from Dak Prescott. All the players have to do is come here and do their job. If they win. We all win.”

The AT&T Stadium and Art Ambassador, Whitfield, will tell you what happens every day off the field is a victory.

Because even the smallest detail is a master piece.

In his words, “The Jones’ we went and got Polaroid pictures. We had a place that could remaster those photos. Another group were the frame people”. Framing lifetime memories of the Cowboys Hall of Famers, on the Hall of Fame level….a level the average ticket holder will never see.”

When asked if this area of the stadium is semi-exclusive, he says, “Yes sir. You ain’t gonna get a chance to see this if you got standing room tickets. Doesn’t mean we don’t love you and care about you.”

It means as sweet as it will be to attend Sundays game for some it gets even sweeter.

Showing the inside of one of the suites, he points out the specialized restroom….the view from 23 rows up…. And the fact they are based on affordability….not title and prestige. And if the suite life gets cramped, you can space out in this private club where everything is oval like a football and every mirror has a TV behind it.

Walking us through the process, Whitfield says, “You’re on the Hall of Fame level and we park your car and you take the elevator up. You’re a VIP. You’re a real VIP.”

VIP’s like Tony Romo and Jim Nantz, who will call Sunday’s playoff game against San Francisco on CBS 11.

In the basement area of the stadium, Whitfield demonstrates “come on in Mr. Romo and you go right to your area where you’re gonna do the broadcasting in.”

When fans are in front of their TV… you can mentally envision where Romo will be seated. Whitfield says, “Let me move the chairs back. I’m standing where Tony would normally stand. Jim Nantz would be here.”

NFL Has No Plans To Move Super Bowl To Arlington; Officials Say It’s Staying In California