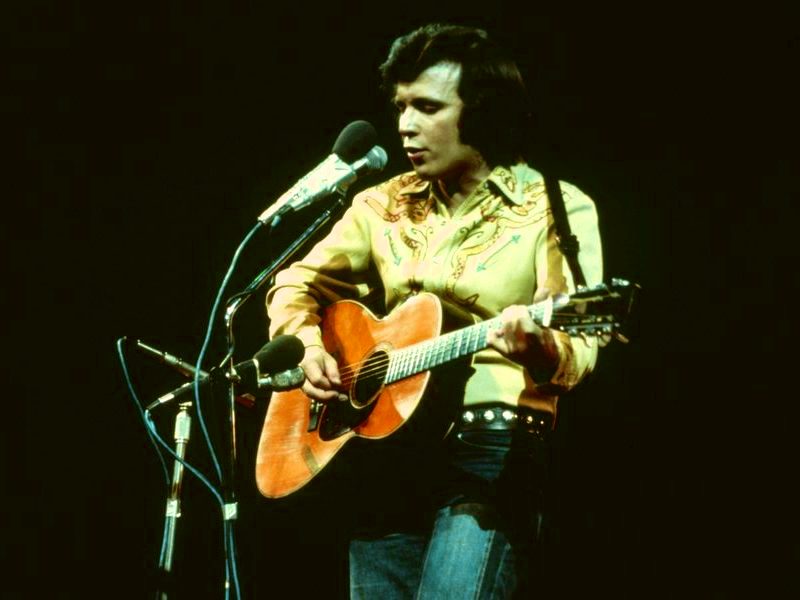 It was 50 years ago Saturday (January 15th, 1972) that Don McLean's "American Pie" topped the Billboard Hot 100 chart for the first week of its month-long run. The song is the origin of the term "the day the music died," about the February 1959 plane crash that killed Buddy Holly, Ritchie Valens, and J.P. "The Big Bopper" Richardson, but that's only a small part of what it's about.

McLean was a huge Holly fan growing up, and he was deeply moved by Holly's death, but says that it's merely the starting off point of what "American Pie" is about: ["The fact that Buddy Holly seems to be the primary thing that people talk about when they talk about 'American Pie' is, is kind of sad. It's only the beginning is about Buddy Holly, and the rest of it goes on and talks about America and politics and the country, and trying to catch some kind of a special feeling that I had about my country, especially in 1970 and '71, when it was very turbulent."] SOUNDCUE (:21 OC: . . . was very turbulent)

Although Buddy Holly only plays a small role in the song's story, McLean is still proud that "American Pie" had a lot to do with the latter-day interest in Holly and his music: ["The event became an enormous thing, if I may say so, with all due respect to myself, because of the song 'American Pie.' If you talk to (author) John Goldrosen, who wrote the book about Buddy Holly, nobody was interested in him — no one wanted the book that he wrote, which ended up being able to be published because of my song. If you talk to (Holly's wife) Maria Elena, they will tell you that Buddy got more publicity after I wrote my song than he'd ever gotten in his life. So, that's just the way it was. I know it sounds self-serving, but if you check it out, you will find that out, and that started the whole thing going."] SOUNDCUE (:36 OC: . . . whole thing going)

McLean's followup single "Vincent" was a tribute to another of his favorite artists, painter Vincent Van Gogh. "Vincent" and its B-side "Castles In The Air" peaked at Number 12 in 1972.

In 2015, the original manuscript for "American Pie" sold at auction last year for a whopping $1.2 million dollars through Christies Auction House. McLean talked about the life of the song that came to define — and often times overshadow — his career, posting a statement through the auction house when it announced the lyric sheet’s sale, writing: "I love the English language as much as anything in life and words really do mean something. I thought it would be interesting as I reach age 70 to release this work product on the song 'American Pie' so that anyone who might be interested will learn that this song was not a parlor game."

He went on to say: “It was an indescribable photograph of America that I tried to capture in words and music and then was fortunate enough through the help of others to make a successful recording. I would say to young songwriters who are starting out to immerse yourself in beautiful music and beautiful lyrics and think about every word you say in a song."

He admitted that he has no emotional attachment to the lyric sheet: "I only have an attachment to my wife, children, and my guitar. In fact, I'm going to rid myself of a lot of stuff. In a year or two, I'm going to have a big Christie's auction with guitars, clothes, boots, saddles, silver and watches. I collect a lot of stuff. It's time to let other people have it."

Sadly, on January 11th, 2017, Buddy Holly's lead guitarist on that final tour, the legendary Tommy Allsup, died at age 85. In addition to playing on such classics as Buddy Holly's "It’s So Easy," the Everly Brothers' "Lucille," Jan & Dean’s "Dead Man’s Curve, and Kenny Rogers' "The Gambler" — Allsup is most famous for giving up his seat on the plane that fateful night to Ritchie Valens in a coin toss.

McLean said in the tour announcement, "After spending the past 18 months at home, I am thrilled to be getting back on the road with my band. 2022 marks the 50th anniversary from when American Pie landed at the Number One spot on the Billboard chart and we will be celebrating on tour all year long. We will be performing all the songs from the American Pie album plus many of the other hits that fans will be expecting to hear."

Don McLean On American Pie Being More Than About Buddy Holly :

Elton John Back On The Road

The Who, Stevie Nicks, Elvis Costello, & Foo Fighters On Board For ‘Jazz Fest 2022’