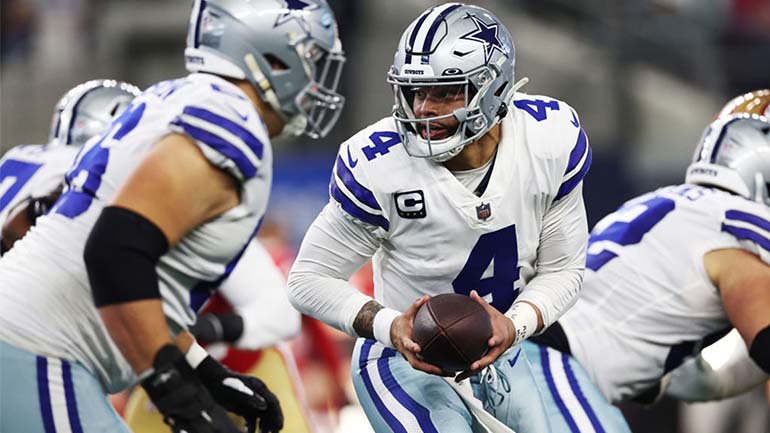 ARLINGTON, Texas (CBSDFW.COM) – The Cowboys won the opening toss, giving the ball to the 49ers to start the first half.

Donovan Wilson #6 of the Dallas Cowboys takes the field prior to a game against the San Francisco 49ers in the NFC Wild Card Playoff game. (credit: Richard Rodriguez/Getty Images)

But the 49ers took the early lead after Elijah Mitchell ran in a touchdown for San Francisco in the first quarter. The Cowboys offense struggled to get started, with Dak going four-and-out on their first drive.

Linebacker Micah Parsons was injured in the first half. He was slow to get up and taken to the tent for evaluation, but returned to the field afterwards.

The Cowboys managed to stop the 49ers advance, holding them to just a field goal.

The #DallasCowboys get away with giving up just 3 points #MicahParsons was on the field for that field goal. Time to put some pressure on that @49ers D @CBSDFW @CBS11Sports #NFLPlayoffs

The Cowboys offense tried to pull off a trick play, but Cedric Wilson’s pass to Tony Pollard went incomplete, resulting in a punt that turned the ball back over to San Francisco.

The first quarter wrapped up with San Francisco leading 10-0.

The 49ers scored another field goal to kick of the second quarter after the Cowboys defense was able to hold them off a first down.

Amari Cooper caught a 20-yard pass from Dak Prescott to put points on the board for the Cowboys, but San Francisco’s Robbie Gould was able to make a 52-yard field goal on the next drive, bringing the score to 16-7.