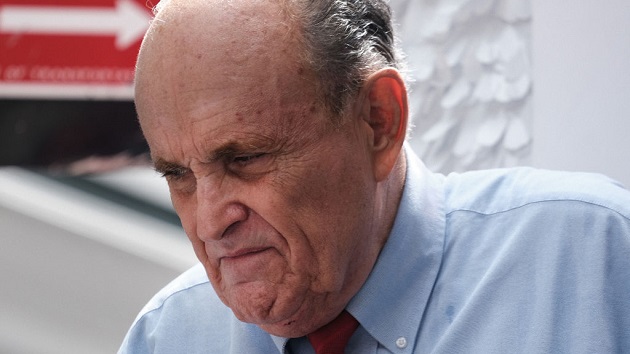 “The Select Committee’s investigation has revealed credible evidence that you publicly promoted claims that the 2020 election was stolen and participated in attempts to disrupt or delay the certification of the election results based on your allegations,” the panel wrote in letters to Giuliani, Ellis, Powell and Trump aide and attorney Boris Epshteyn.

Within the last week, the House Select Committee also subpoenaed the phone records of Eric Trump, former president Trump’s second eldest son — a source with direct knowledge has confirmed to ABC News. The subpoena was sent to a cell phone provider of Eric Trump.

The group subpoenaed Tuesday worked with Trump to contest the results of the election in the fall of 2020, traveling to key states and huddling with Trump and other White House aides in the Oval Office as the president weighed how to overturn the results.

“The four individuals we’ve subpoenaed today advanced unsupported theories about election fraud, pushed efforts to overturn the election results, or were in direct contact with the former President about attempts to stop the counting of electoral votes,” Chairman Bennie Thompson, D-Miss., said in a statement. “We expect these individuals to join the nearly 400 witnesses who have spoken with the Select Committee as the committee works to get answers for the American people about the violent attack on our democracy.”

Giuliani urged Trump to seize voting machines after being told the Department of Homeland Security lacked the authority to do so, the committee said, pointing to a report from the news website Axios and documents obtained by investigators.

The former mayor of New York City, a close Trump confidant, spoke at the Jan. 6 rally outside the White House, urging for “trial by combat” over the election results before Trump supporters marched to the Capitol.

Powell, according to the committee, reportedly urged Trump to seize voting machines to find evidence that foreign hackers had altered the election results.

Powell, Giuliani, Ellis and Epshteyn did not immediately respond to requests for comment.

Dominion Voting Systems, a Colorado-based voting machine company, has filed defamation lawsuits against both Giuliani and Powell and is seeking billions of dollars in damages over their unfounded claims of election fraud. A federal judge denied both Powell and Giuliani’s efforts to have the suits dismissed.

ABC’s John Santucci, Olivia Rubin and Will Steakin contributed to this report.