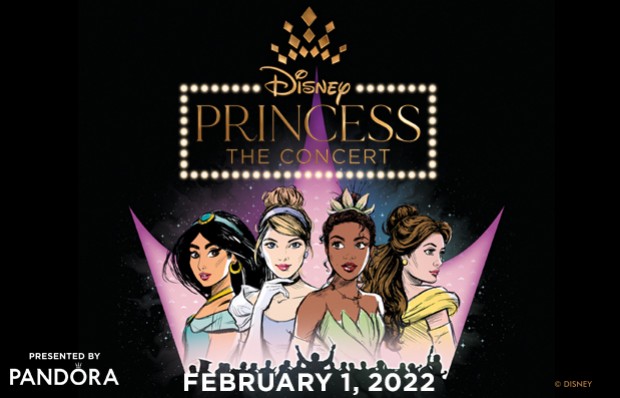 “Be our guest” as an all-star quartet of Broadway and animated film icons, their magical Music Director and enchanting Prince celebrate all the Disney Princesses in an unforgettable evening of songs, animation, and stories as Disney Princess – the Concert comes to the Stride Bank Center on Tuesday night.
The 80+ city U.S. tour launches its first spring leg with Tony-nominee Susan Egan (Broadway’s original ‘Belle’ in Beauty and the Beast, ‘Meg’ in Disney’s animated feature Hercules), Arielle Jacobs (Broadway’s ‘Jasmine’ in Aladdin, In The Heights), Disney Channel icon Anneliese van der Pol (That’s So Raven, Raven’s Home, Broadway’s final ‘Belle’ in Beauty and The Beast), and BroadwayWorld Award-winner Syndee Winters (Broadway’s ‘Nala’ in The Lion King, Hamilton).
Fans are encouraged to dress up in their best royal attire for an unforgettable evening. Dreams will come true as these acclaimed performers sing over 30 favorite Disney Princess songs, and share their exclusive, hilarious and heartfelt behind-the-scenes stories from their time on the stage and screen. Larger than life animations and visuals accompanying the music will immerse the audience in pure Disney magic.
The concert will start at 7 pm, with doors opening to the public at 6 pm. Tickets range from $29 to $85 and can be purchased on the second floor of Convention Hall, 580.616.7380 or StrideBankCenter.com.

Concert Replacement Work to Cause Closures at Cherokee & Adams