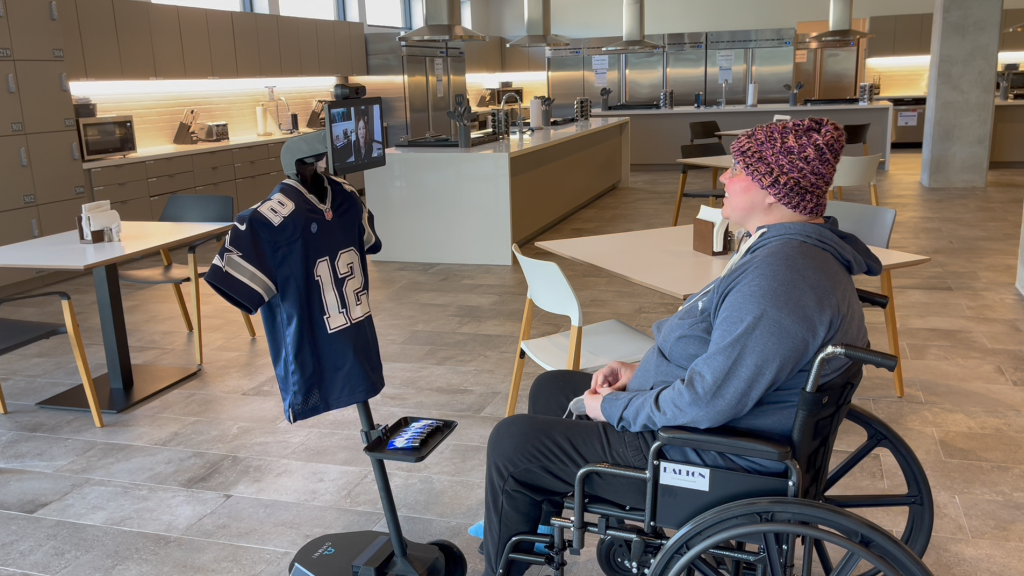 NORTH TEXAS (CBSDFW.COM) – The Dallas Cowboys are used to having almost 100,000 fans at AT&T Stadium, rooting for them every game. But now they have a chance to show other fans some much needed support.

Jeff Fehlis, the executive vice president with the American Cancer Society, says, “We’ve got the Dallas Cowboys organization cheering them on. And that’s critical in the course of a cancer battle.”

It’s a battle that can only be won with a team effort. Cowboys chief branding officer Charlotte Jones greets some of the patients through the use of an iPad.

The Gene and Jerry Jones Family Hope Lodge in Dallas offers cancer patients and their caregivers a home away from home as they receive treatments in North Texas medical centers.

Thanks to a robotic device, that holds an iPad known as the ‘Starbot’, sick fans can now interact with their favorite Dallas Cowboys players… past and present. Anyone can pop up on the screen, from Hall of Famer Drew Pearson to soon-to-be Hall of Famer DeMarcus Ware.

“It lets them know there are some really important people out there that care about them and want to encourage them in their battle. It’s meaningful.”

Meaningful in the sense of helping them hopefully defeat an opponent no one should have to face.

In partnership with the American Cancer Society, and Baylor Scott and White, the ‘Starbot’ will make an appearance at the Jones Family Hope Lodge on the first Tuesday of every month.