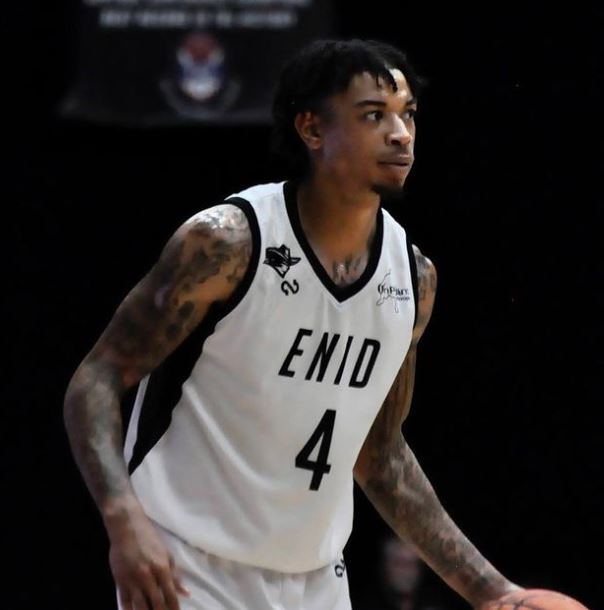 After a rocky first half of the season, the Enid Outlaws are returning to form as one of the best teams in The Basketball League.

Potawatomi’s Mustapha Traore grabbed a steal and hit a layup to tie the game at 87 with just over a minute to play in the fourth quarter. Both teams then traded misses down the stretch, Enid held the ball for the final shot with the shot-clock turned off. PG Chuck Guy drove in from the right-wing. Once he reached the FT line, Guy kicked the ball out to an open KD Moore on the left-wing. In rhythm, Moore swished the game-winning shot from beyond the arc with 3.7 seconds to go in the game.

Enid, playing without star rookie guard Kadavion Evans, got a big boost off the bench from their new addition, Darin Johnson. Johnson shot 3-7 from 3PT-range and had 13 points. He adds a much-needed perimeter shooting that the Outlaws have lacked much of 2022.

Also adding 13 points off the bench was big man Eric Hamilton who had 7 rebounds.

Chuck Guy, along with the game-winning assist, had 10 points, 8 assists, 5 rebounds, and 6 steals. Ricardo Artis led Enid with 18 points and was tied for the team lead in rebounds with 7.

For the Fire, Deshawn Munson led the way with 23 points, 12 assists, and 13 rebounds.

The difference-maker for Enid is truly their depth as a team, in two different ways. Enid has several players that can explode for 25+ points on any given night. Also, the Outlaw roster is packed to the brim with talent that can get plugged in and will make difference in the game, without much of a letdown from a starter exiting.

Enid has won 7 games in a row and is in first place in the TBL Central.

The Outlaws are in action on Friday when they face the Little Rock Lightning on the road, and then Enid returns home to face the Dallas Skyline at the Stride Bank Center at 4 PM on Sunday.

Students with straight A’s in grades K-12 get in FREE to Enid Outlaws home games!

Enid Outlaws One Win Away From Winning the TBL Finals