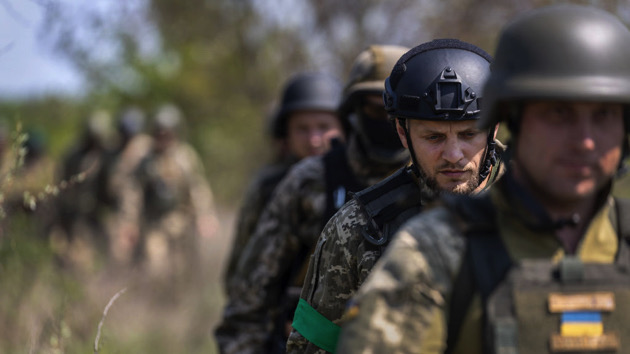 (NEW YORK) — Russian President Vladimir Putin’s “special military operation” into neighboring Ukraine began on Feb. 24, with Russian forces invading from Belarus, to the north, and Russia, to the east. Ukrainian troops have offered “stiff resistance,” according to U.S. officials.

The Russian military has since launched a full-scale ground offensive in eastern Ukraine’s disputed Donbas region, attempting to capture the strategic port city of Mariupol to secure a coastal corridor to the Moscow-annexed Crimean Peninsula.

Russian troops suffered “significant” loss while attempting to cross a river in the disputed Donbas region of war-torn eastern Ukraine, the U.K. Ministry of Defense said Friday in an intelligence update.

“Ukrainian forces successfully prevented an attempted Russian river crossing in the Donbas,” the ministry said. “Images indicate that during the crossing of the Siverskyi Donets river west of Severodonetsk, Russia lost significant armoured manoeuvre elements of at least one Battalion Tactical Group as well as the deployed pontoon bridging equipment.”

“Conducting river crossings in a contested environment is a highly risky manoeuvre and speaks to the pressure the Russian commanders are under to make progress in their operations in eastern Ukraine,” the ministry added. “Russian forces have failed to make any significant advances despite concentrating forces in this area after withdrawing and redeploying units from the Kyiv and Chernihiv Oblasts.”

On Wednesday, the Ukrainian Ministry of Defense released images purportedly showing a wrecked pontoon crossing over the Siverskyi Donets river, with a number of damaged or destroyed armored vehicles on both banks.

“Artillerymen of the 17th tank brigade of the #UAarmy have opened the holiday season for [Russian forces],” the ministry said in a post on Twitter, alongside the photos. “Some bathed in the Siverskyi Donets River, and some were burned by the May sun.”

Sen. Rand Paul, R-Ky., single-handedly sidelined the $40 billion emergency Ukraine aid bill until next week in an effort to force lawmakers to include funding for a new watchdog effort to police how the billions in taxpayer dollars are spent.

“There is now only one thing holding us back: the junior Senator from Kentucky is preventing swift passage of Ukraine aid because he wants to add — at the last minute — his own changes directly into the bill. His change is strongly opposed by many members from both parties,” Schumer said Thursday. “He is not even asking for an amendment … he is simply saying, ‘my way or the highway."”

But Paul stood his ground, highlighting the nearly $60 billion that the U.S. will have given to Ukraine if this package passes.

After Paul blocked an effort to expedite passage, Schumer reiterated that Paul will not get his desired changes without a vote and blamed Paul for slowing aid.

The aid bill has enormous bipartisan support and is expected to pass by sometime next week.