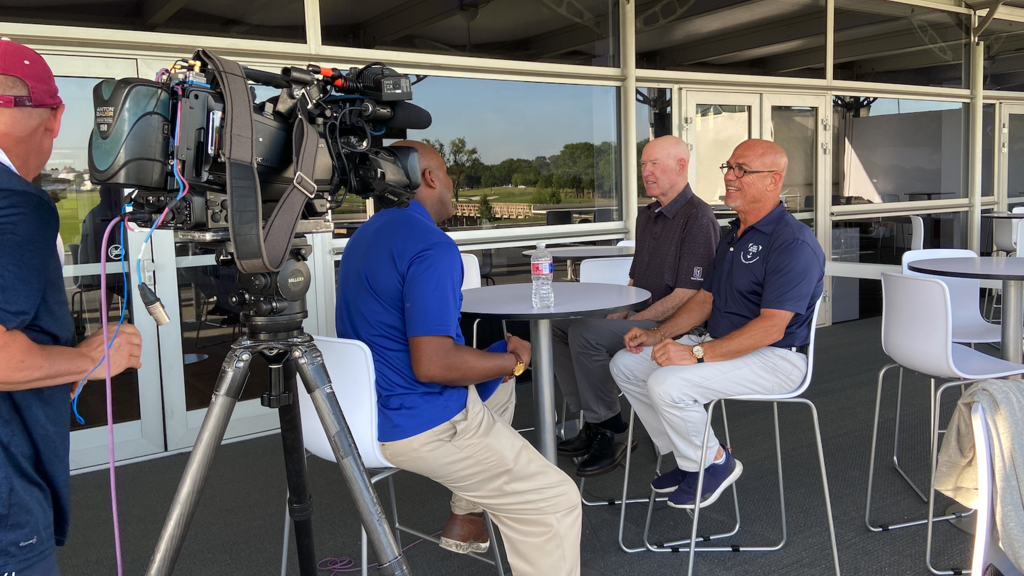 The couple finally has the chance to see, in-person, the course host the Byron Nelson, as opposed to last year when they were forced to watch the tournament from their home in Montana.

“I saw guys this week that I haven’t seen in 20, 30, 40 years, ya know when I played out here on tour,” Weiskopf said. He was one of the best in the sport as a player — having won a major title and had five runner up finishes in majors.

Weiskopf’s major passion (post career) became designing golf courses. He now has around 80 to his name, including TPC Craig Ranch. It was his friendship with course and community developer David Craig, that turned blue prints nearly 20 years ago, into what you see today.

Weiskopf isn’t just a master of laying out the course in McKinney, he’s a master of perseverance. He was diagnosed with pancreatic cancer in 2021. Thinking about it hw said, “It’s a tough, tough cancer to overcome that’s for sure. I still have some work left to do in the future, some more chemo and things like that, but we’ll do that… But without that support from people that don’t even know, is so meaningful.”

Even more meaningful is the support from someone Weiskopf does know.

When Craig got the news of Weiskopf’s diagnosis he called upon the guys in the red pants. The Salesmanship Club of Dallas was able to use their connections to get Weiskopf a consultation and eventually treatment at the world renowned MD Anderson Cancer Center in Houston.

As evidenced by one of the main streets that leads to the course being named Weiskopf Avenue, Weiskopf’s impact and imprint will be forever lasting at Craig Ranch and in heart of his buddy.

“I get a little emotional when I’m thinking about it,” Craig said. “But take action, find out how you can help. Don’t be pushy. He can hard headed sometimes. But just be there. And I’m blessed and fortunate that I could be there.”

Tom closes “It goes back to one thing. The easiest thing in the world to do is to give up. You gotta keep going, pushing forward, day-by-day, day-by-day, not matter how bad you feel. And just believe at the end of the day you’re gonna get through this.”