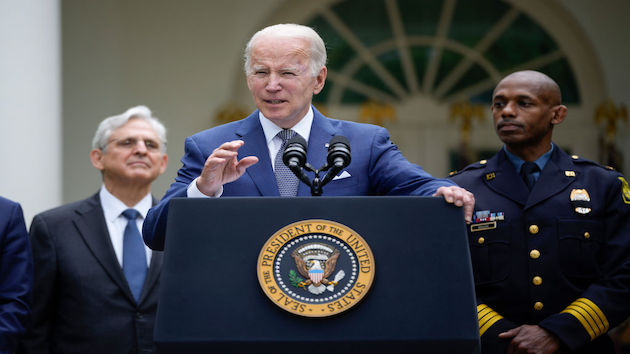 (WASHINGTON) — The ongoing baby formula shortage — with nearly half of products recently unavailable, according to experts — triggered a flurry of responses from Washington this week as the Biden administration and Congress sought to address the public outcry.

“There’s nothing more urgent we’re working on than that right now,” President Joe Biden said Friday from the White House at an event that had been meant to tout public safety funding — reflecting how the lack of formula has quickly overtaken other administration concerns.

Criticism and dismay from parents grew ever sharper as families encountered more empty shelves, with an estimated 43% of formula products out of stock as of Sunday at stores across the U.S., according to tracking firm Datasembly.

The shortage — compounded by broader, coronavirus-related supply chain issues — was worsened by a recall from Abbott, one of the nation’s largest manufacturers of baby formula products.

The company pulled three of its popular brands in February and closed its plant in Sturgis, Michigan, in the wake of bacterial infections linked to two infants who died after consuming Abbott formula and a Food and Drug Administration inspection that documented problems at Abbott’s Michigan facility, including the same bacteria.

(Abbott maintains there is no evidence its products were connected to the babies’ deaths, though it has acknowledged the infractions the FDA found elsewhere at the plant.)

A complaint against Abbott was first filed in September, but the FDA didn’t investigate the plant until approximately four months later.

Now, the Biden administration is facing questions from Republicans and others about how long problems may persist and what solutions are available to the public — even as the government stresses its watchdog role in investigating Abbott.

“This is not a Third World country,” Rep. Elise Stefanik, a New York Republican and a new mother, said at a Thursday GOP news conference. “This should never happen in the United States.”

Responding to such criticism, Biden insisted Friday that “if we had been better mind readers, we could’ve [acted more quickly], but we moved as quickly as the problem became apparent to us. We have to move with caution as well, and speed.”

The White House has not provided a timeline for when shelves will be restocked, though press secretary Jen Psaki maintained Thursday that the government has been working “for months” on this issue as they roll out new steps aimed at alleviating the problem.

Among the fixes, as Psaki and Biden then reiterated on Friday, was supporting the ability of parents to use benefits from the Special Supplemental Nutrition Program for Women, Infants, and Children (also known as WIC) to buy formula. Abbott has agreed to provide rebates through August for WIC users to buy other products.

The administration is also calling on federal and state officials to crack down on reports of potential price gouging.

The FDA will announce next week ways that the U.S. can import more products from abroad. It remains unclear how the imports would work given the FDA’s requirements on formula packaging and vitamin content, though Commissioner Robert Califf tweeted Friday that the agency will ensure imported products meet “certain safety, quality and labeling standards.”

Biden said Friday he believed the timeline for imports would be a “matter of weeks or less.”

The Department of Health and Human Services has also unveiled a new website where parents and caregivers can go to obtain information on where to find formula and other resources.

Psaki said Thursday the White House was considering “every option,” including invoking the Defense Production Act, which gives the president substantial power over private industry. But on Friday, Psaki noted that the administration views the DPA as a potential “long-term” solution. “Our focus primarily is twofold: One is increasing supply, and the other is making it readily available,” she said.

Meanwhile, the Democratic majority on Capitol Hill is launching investigations into the nationwide shortage. The House Oversight Committee is demanding records from four major manufacturers.

“We have asked for a briefing by the end of the month, and we’ve asked three basic questions: Do they have the supply to meet the demand? Is there a supply chain problem that can be corrected? And what can we do to make sure this doesn’t happen again?” Chairwoman Carolyn Maloney, D-N.Y., told ABC News.

A group of 32 Senate Democrats on Friday wrote a letter to urging the Infant Nutrition Council of America — an association of formula manufacturers — to take “immediate action” to address the shortage, though they didn’t offer any specific steps the group can or should implement.

“We are calling on you and your member companies to take immediate action and ensure that infant formula manufacturers are making every effort to mitigate this dangerous shortage and get children the nourishment they need,” the lawmakers wrote.

Speaker Nancy Pelosi said Friday the House of Representatives intends to take legislative action as soon as next week, voting on a bill that would grant emergency authority to the WIC program to address supply disruptions and recalls by relaxing certain regulations.

Senate Republican Leader Mitch McConnell addressed the shortage in his own floor speech on Thursday, calling it “outrageous and unacceptable”.

“It seems that while President Biden’s administration and the FDA … have been asleep at the switch in terms of getting production back online as fast as possible,” he argued.

Utah Republican Sen. Mitt Romney penned his own letter to both the FDA and United States Department of Agriculture earlier this week urging the agencies to “protect infant health by ensuring they have access to safe formula, and when crises arise, to initiate contingency plans to mitigate shortages that risk the lives of infants across the nation.”

House Appropriations Committee Chair Rosa DeLauro, D-Conn., announced Wednesday her panel would examine the Abbott plant in Michigan, where the bacteria was found, and the “FDA’s delayed response to this horrific incident.”

Abbott said it could restart operations at its Michigan facility within two weeks of getting the green light from the FDA. From there, the company estimates it would take an additional six to eight weeks to get the product into stores.

But the FDA said Friday that Abbott’s plant still carried contamination risks as of March.

“The plant remains closed as the company works to correct findings related to the processes, procedures, and conditions that the FDA observed during its inspection of the facility from January 31 – March 18, 2022, which raised concerns that powdered infant formula produced at this facility prior to the FDA’s inspection carry a risk of contamination,” an FDA official said.

Abbott says they are working to address the FDA’s issues so they can resume operations.

“We are confident that we can continue to produce safe, high-quality infant formula at all of our facilities as we have been doing for millions of babies around the world for decades,” the company said in a statement.