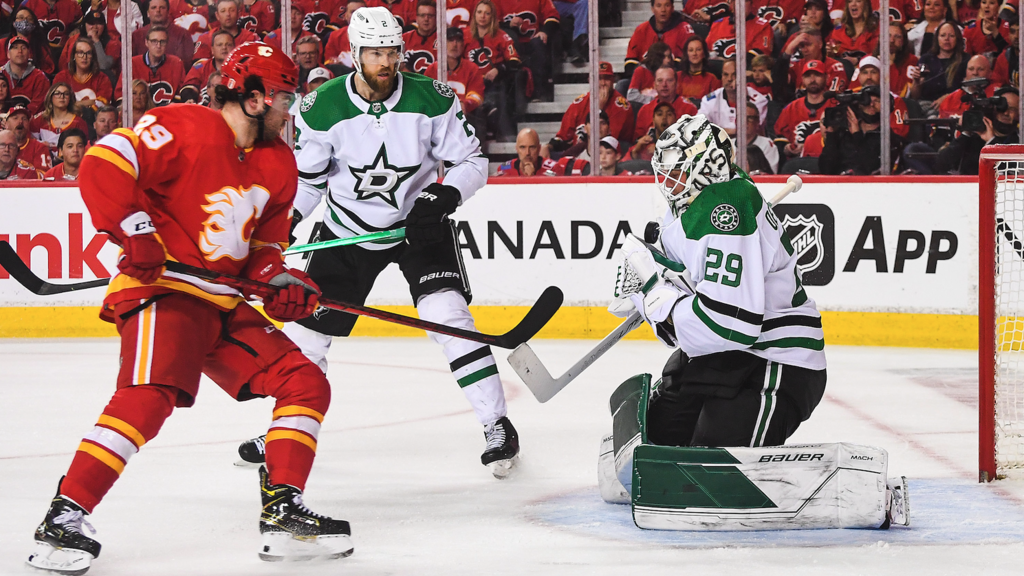 CALGARY, Alberta (CBSDFW.COM/AP) — It was a heck of a series for newcomer Jake Oettinger, but the rest of the Dallas Stars couldn’t get it together to continue their run for the Stanley Cup.

Johnny Gaudreau saw the puck bouncing his way, so he raced over, slapped it toward the net — and sent the Calgary Flames to a Game 7 victory.

Gaudreau scored 15:09 into overtime to lift Calgary past the Dallas Stars 3-2 on Sunday night, giving the Flames just their second playoff series win in the last 17 years.

“You dream about stuff like that,” Gaudreau said, “scoring in a Game 7 in overtime.”

Gaudreau got the rebound of Elias Lindholm’s attempt and put a sharp-angled shot over goalie Oettinger, who made 64 saves for Dallas — a franchise record for the most stops in a Game 7.

“You go into overtime with Jake, you know it’s going to take a perfect shot to beat him, and it was a perfect shot,” Stars coach Rick Bowness said. “Johnny made a great shot, right under the bar. You can’t do anything about that.”

Tyler Toffoli and Matthew Tkachuk scored their first goals of the series, and Jacob Markstrom stopped 26 shots and had an assist for the Flames, who will face the Edmonton Oilers in the Western Conference’s semifinal in the first postseason Battle of Alberta since 1991. The series opens Wednesday in Calgary.

Oettinger became the second player in NHL history to have 60 or more saves in a Game 7 since 1955, when shots on goal were first tracked. The New York Islanders’ Kelly Hrudey made 73 saves in a 3-2 win over Washington in four overtimes in 1987.

“He played a hell of a game,” Stars captain Jamie Benn said. “I haven’t seen too many like that. I mean, if it wasn’t for him, we wouldn’t even have been close to overtime or having a chance to win.”

Benn and Vladislav Namestnikov scored for the Stars, who praised the 23-year-old Oettinger for his performance.

“Just keep your head up,” Oettinger said his teammates told him. “Obviously, it’s sad and some of those guys you don’t know if you’re going to play with them ever again, so it’s a really tough pill to swallow.”

Calgary’s Darryl Sutter improved to 8-3 in Game 7s — the most wins by a coach in those situations in NHL history. He has also won each of his last five Game 7 matchups.

“I don’t get too excited about it,” Sutter said. “Not many guys have done and not many get the opportunity to do it. It’s what you coach for, to win series.”

After reaching the Stanley Cup Final in 2004, when Calgary fell in seven games to the Tampa Bay Lightning — 2005 was a lockout year — the Flames didn’t win another playoff series until 2015, when Calgary was knocked out in the second round by Anaheim.

Calgary outshot Dallas 52-23 over three periods, but the score was deadlocked heading into the first overtime period of the series.

“We deserved to win,” Sutter said.

Oettinger stopped Gaudreau on his doorstep near the 11-minute mark of the third, followed by Markstrom turning away Jacob Petersen on a breakaway.

The Flames tied it at 2 in the second period on Tkachuk’s goal a second after a minor penalty by Dallas expired. Markstrom head-manned the puck to Gaudreau, who dished to Tkachuk for a sharp-angled shot to the top corner at 8:44.

The Flames outshot Dallas 17-8 in the first period, but the Stars led 1-0 on Benn’s goal 40 seconds into the game. Tyler Seguin was at the side of the net when he fed Benn in the mid-slot and the Stars captain beat Markstrom stick side.

Toffoli tipped in Oliver Kylington’s shot from the boards just inside the blue line at 1:46 of the second period to make it 1-1.

“They played us so hard and made us earn every inch,” Tkachuk said. “It was one of the best feelings I’ve had in hockey when that went in for Johnny.”