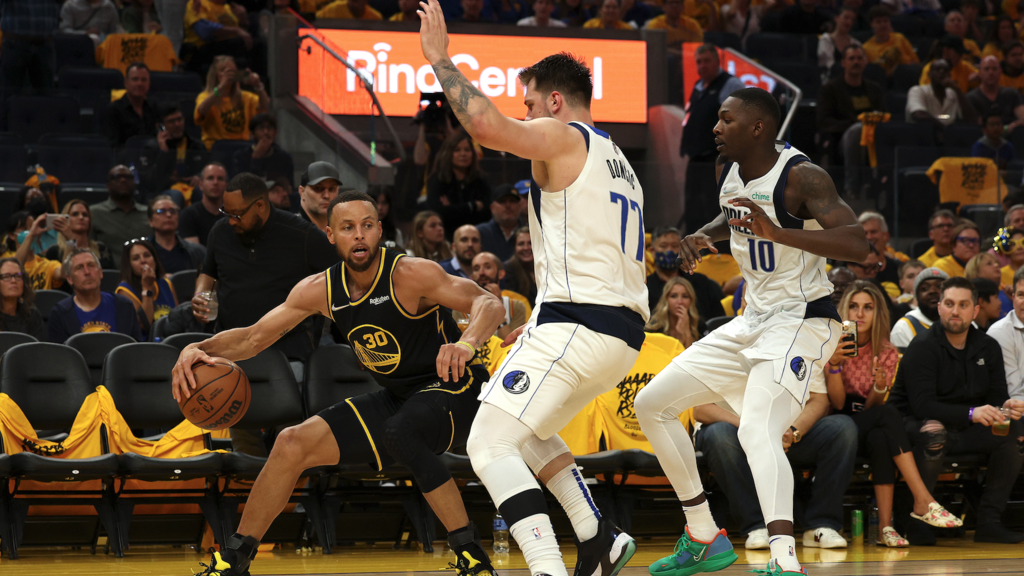 SAN FRANCISCO (CBSDFW.COM/AP) — It was not a story of 3-pointers or offensive rebounds for the Dallas Mavericks in California and it led to their downfall.

Stephen Curry and Klay Thompson got on a roll that proved too much for Dallas to stop. Especially because Andrew Wiggins worked end to end to make sure Luka Doncic couldn’t get going.

Curry had 21 points and a game-high 12 rebounds, Golden State held Doncic in check and the Warriors beat the Mavericks 112-87 on Wednesday night for a 1-0 lead in the Western Conference finals.

“Just make him work, that was the main thing,” Wiggins said.

Doncic scored 20 points but shot just 6 for 18 and 3 of 10 from deep. He made back-to-back 3-pointers late in the first half to get his team within 54-45 at the break, but Curry and Thompson heated up and helped the Warriors pull away in the second half.

Jalen Brunson scored 14 points but missed all five of his 3s for the surprising Mavs, who stunned the top-seeded Suns in a 123-90 thumping in Game 7 on Sunday in Phoenix.

Game 2 in the best-of-seven series is Friday night at Chase Center, where the raucous, yellow-clad sellout crowd brought back memories of that 2007 “We Believe” Warriors playoff team led by Baron Davis that shocked the No. 1-seeded Mavericks in a six-game first-round upset at Oracle Arena.

That helped propel Golden State back to prominence. The Warriors reached five straight NBA Finals from 2015-19 but missed the playoffs the past two years before this run.

Wiggins added 19 points, getting Golden State going by making six of his first eight shots on the way to shooting 8 for 17. Jordan Poole also scored 19 off the bench.

Doncic received a scratch across his face early from a first-quarter swipe by Wiggins. The mark — “makes me look tough,” he quipped — went from the bridge of the star guard’s nose across his right cheek under the eye. Doncic also tugged at his troublesome right shoulder that has been taped previously during these playoffs.

“They did a really good job. Wiggins picking him up full court,” Mavs coach Jason Kidd said. “They went box-and-one, they went zone. We understood coming into the series that we were going to see that. We’ll go back and look at the video and see what we can do better.”

Stopping Doncic, who was averaging 31.5 points in the playoffs, is the tall task this time after the Warriors already handled two-time reigning MVP Nikola Jokic of Denver in the first round, then Ja Morant early last series before his knee injury.

“I thought Wiggs was fantastic,” coach Steve Kerr said. “Doncic is as difficult a cover as there is in this league. … It’s important to make him work. He’s so good. Any great player in the league you’re trying to limit the damage that they do.” 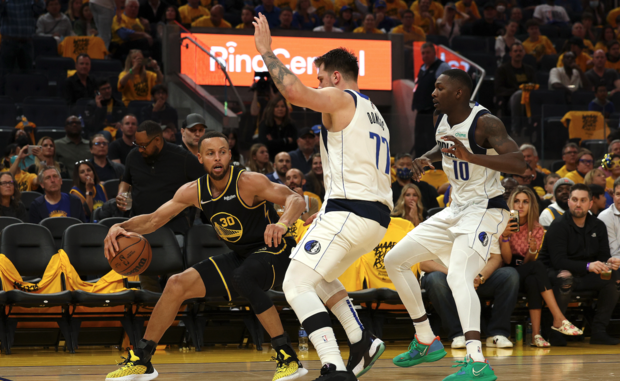 Stephen Curry #30 of the Golden State Warriors is defended by Luka Doncic #77 of the Dallas Mavericks during Game One of the 2022 NBA Playoffs Western Conference Finals on May 18, 2022 in San Francisco.

Curry, last season’s scoring champ, missed his initial five 3-point tries before connecting with 50 seconds left in the first half. But he got involved other ways by dishing out four assists and grabbing seven rebounds.

Then he hit two quick 3s in sparking a 10-2 burst to begin the third for a Golden State squad that eliminated Memphis in a six-game semifinal series.

“It is how we play,” Curry said. “When you have that ability to create separation like we did in the third quarter, it’s a fun way to play.”

Thompson scored all of his 15 points after halftime.

“I didn’t have a field goal in the first half but that will never discourage me,” Thompson said. “I will always hunt my shot.”

Kevon Looney remained in the starting lineup for Kerr as the coach made his return to the bench after sitting out the final three games against Memphis with COVID-19.

“It was great to be back. I missed being out there with the guys,” Kerr said. “Amazing atmosphere here at Chase and we’re excited to keep going.”

Looney finished with 10 points, five rebounds and four assists after coming in to start the Game 6 clincher against the Grizzlies.

Kidd’s Mavericks couldn’t keep up in a drastic contrast of styles featuring the slow-paced Dallas attack and up-tempo Warriors.

“We would like to play our pace but the Warriors have a unique pace, they’re going to get out and put a lot of pressure on your defense in transition,” Kidd said. “We have to be cautious of that. We don’t want a track meet.”

Dallas received a $50,000 fine by the NBA — the team’s second penalty this postseason — for “team bench decorum” during the Suns series after players and a member of the coaching staff remained standing for extended time far enough from the bench area that they were “encroaching upon the playing court during game action” during Game 7 against the Suns.

“Just trying to figure out what we did wrong to get the fine,” Kidd said. “… Who complained? It was a blowout so I don’t think the fans were complaining. I thought the guys did what they were supposed to do. They were cheering on their guys.”

Griner sends letter to President Biden pleading for his help