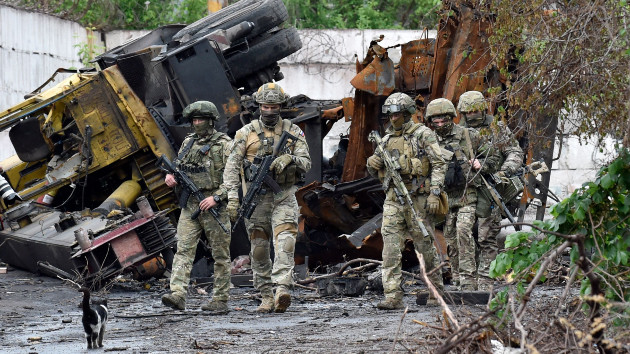 (NEW YORK) — Russian President Vladimir Putin’s “special military operation” into neighboring Ukraine began on Feb. 24, with Russian forces invading from Belarus, to the north, and Russia, to the east. Ukrainian troops have offered “stiff resistance,” according to U.S. officials.

The Russian military has since launched a full-scale ground offensive in eastern Ukraine’s disputed Donbas region, attempting to capture the strategic port city of Mariupol to secure a coastal corridor to the Moscow-annexed Crimean Peninsula.

May 19, 6:30 am
Russia puts two Ukrainian commanders on wanted list

Russia has placed two Ukrainian commanders on a wanted list.

Serhiy Velychko and Kostiantyn Nemychev, commanders of the Azov Regiment, a far-right group now part of the Ukrainian military, have been added to the Russian Ministry of Internal Affairs’ database of wanted fugitives in connection with a criminal case.

According to the Russian Investigative Committee, Velychko and Nemychev are accused of attempted murder of at least eight Russian servicemen who sustained multiple injuries in eastern Ukraine’s Kharkiv region. Criminal charges were brought against the pair in absentia, and Russian authorities are working to track down and apprehend them.

May 18, 10:41 pm
Senate confirms new US ambassador to Ukraine

The vote took place on the same day the U.S. officially resumed operations at its embassy in Kyiv.

May 18, 3:46 pm
Google’s Russian business to file for for bankruptcy

Google Russia has published a notice of its intention to file for bankruptcy, a spokesperson told ABC News in a statement.

“We previously announced that we paused the vast majority of our commercial operations in Russia. The Russian authorities’ seizure of Google Russia’s bank account has made it untenable for our Russia office to function, including employing and paying Russia-based employees, paying suppliers and vendors, and meeting other financial obligations,” a Google spokesperson said.

Adding, “People in Russia rely on our services to access quality information and we’ll continue to keep free services such as Search, YouTube, Gmail, Maps, Android and Play available.”

May 18, 3:34 pm
US, European allies ‘will not tolerate any aggression against Finland or Sweden,’ Biden adviser warns

U.S. and European allies “will not tolerate any aggression against Finland or Sweden” as their applications to join NATO are being considered, White House national security adviser Jake Sullivan warned Wednesday.

President Joe Biden said the U.S. would “remain vigilant against any threats to our shared security, and to deter and confront aggression or the threat of aggression.”

Sullivan was asked to clarify if that meant the U.S. was extending NATO security protections to Finland and Sweden during this time, and he said Article 5 only kicks in when all 30 allies ratify the accession.

“But the United States, is prepared to send a very clear message, as are all of our European allies, that we will not tolerate any aggression against Finland or Sweden during this process, and there are practical measures that we can take along those lines that Secretary [of Defense Lloyd] Austin will coordinate with his counterparts about Finland and Sweden,” Sullivan told reporters.

With Turkey opposed to this move, Sullivan told ABC News’ MaryAlice Parks that the White House is “confident at the end of the day” that Finland and Sweden “will have an effective and efficient accession process” and that “Turkey’s concerns can be addressed.”

Biden will host the leaders of Sweden and Finland at the White House Thursday.

“Two nations with a long tradition of neutrality will be joining the world’s most powerful defensive alliance, and they will bring with them strong capabilities and a proven track record as security partners and President Biden will have the opportunity to mark just what a historic and watershed moment this is when he meets with them tomorrow,” Sullivan said.

May 18, 3:15 pm
Blinken meets with Turkish counterpart at UN ahead of NATO summit

Ahead of a meeting at the United Nations, Secretary of State Antony Blinken met with Turkish Foreign Minister Mevlut Cavusoglu on Wednesday.

Blinken told reporters he was grateful for the solidarity Turkey has shown against Russian aggression.

While Cavusoglu said he would work with Blinken to “overcome the differences through dialogue and diplomacy,” he signaled that Turkey still had significant reservations about Sweden and Finland joining NATO, complicating their path to membership.

“Turkey has been supporting the open door policy of NATO even before this war, but with regards to these possible candidates—already candidate countries—we have also legitimate security concerns that they have been supporting terrorist organizations, and there are also export restrictions on defense products,” Cavusoglu said.

Turkey has expressed concerns about Finland and Sweden joining NATO over the countries’ support of the Kurdistan Workers’ Party, or PKK, which the Turkish government considers a terrorist organization.

Russian offensive operations in Donbas are becoming more modest, shrinking both in size and scale, according to a senior U.S. defense official.

The Russians are making little progress so far in Donbas, with lots of back-and-fourth between both sides, according to the official.

“We see them hew very closely to their doctrine of artillery fire then a font of frontal attack by formations that are small, and in some cases, not fully resourced, fully manned, fully strong. And they get rebuffed by the Ukrainians,” the official said.

Russian forces are also still suffering from poor communication between commanders and are having other coordination issues, according to the official.

To the northeast of Kharkiv, Ukrainian forces continue to push Russian troops back toward their border, according to the official.

Russian forces are making some progress pushing closer toward the Black Sea from between Kherson and Mykolayiv, according to the official. The official said it is not clear what the intent is for this line of advance, but the U.S. sees no signs of an imminent naval assault at this time.

The U.S. believes Russia is “certainly trying” to disrupt to flow of military aid moving through Ukraine, but there have been no indications that it has had any success, according to the official.

Three of the eleven Mi-17 helicopters, more than 200 of the 300 Switchblade drones and nearly 10 Phoenix Ghost drones that the U.S. has promised Ukraine have been delivered, according to the official. The Ukrainians have told the Pentagon that 79 of the 90 U.S. howitzers that were delivered are now being used in combat.

May 18, 9:53 am
Finland, Sweden formally submit applications to join NATO

Stoltenberg welcomed the requests, saying, “This is a good day, at a critical moment for our security,” according to NATO.

“Every nation has the right to choose its own path. You have both made your choice, after thorough democratic processes. And I warmly welcome the requests by Finland and Sweden to join NATO,” Stoltenberg said Wednesday.

Adding, “You are our closest partners. And your membership in NATO would increase our shared security.”

May 18, 9:25 am
Russian soldier pleads guilty to killing civilian

It’s the first trial Ukraine has conducted for an act that could be considered a war crime.

Asked by the presiding judge whether he accepted his guilt, Shyshimarin said: “Yes. Fully yes.”

As Turkey becomes more vocal about its opposition to Sweden and Finland joining NATO, the State Department said it is still assured of the alliance’s unified support for the two prospective members.

State Department spokesperson Ned Price said during a briefing Tuesday that Secretary of State Antony Blinken came away from meetings with NATO allies with a “sense of confidence there was strong consensus for admitting Finland and Sweden into the alliance if they so choose to join, and we’re confident we’ll be able to preserve that consensus.”

Price said that assessment came from what Blinken heard in conversations behind closed doors.

Turkey’s president, Recep Tayyip Erdogan, has publicly said that both candidates are untrustworthy because he perceives them as being supportive of groups Ankara views as extremist.

There is speculation that Turkey’s opposition is an attempt to leverage the moment to achieve its own policy goals or concessions from the U.S. Price said Tuesday that Turkey has not made any specific requests.

Price confirmed that Blinken will meet with his Turkish counterpart on the sidelines of the U.N. on Wednesday, adding that “other conversations are ongoing between and among current NATO allies and potential aspirant countries.”

May 17, 2:22 pm
Finland, Sweden to jointly submit applications for NATO membership on Wednesday

Swedish Prime Minister Magdalena Andersson’s office announced Sweden and Finland will jointly submit an application for NATO membership on Wednesday, after she met with Finnish President Sauli Niinistö in Stockholm.

“It is a message of strength and a clear signal that we stand united going into the future,” Andersson said in a joint press conference with the Finnish president.

The two leaders are set to meet President Joe Biden at the White House on Thursday.

The two countries have stepped away from nonalignment in the wake of Russian’s invasion of Ukraine, and fears for their own security.

The International Criminal Court deployed a team of 42 investigators forensic and support personnel to Ukraine to advance investigations into crimes falling under ICC jurisdiction and provide support to Ukrainian authorities.

“This represents the largest ever single field deployment by my office since its establishment,” ICC prosecutor Karim Khan said Tuesday.

Khan said 21 countries have offered to send national experts to his office and 20 states have committed to provide financial contributions.

“I look forward to working with all actors, including survivor groups, national authorities, civil society organisations and international partners, in order to accelerate this collective work moving forward,” Khan said.

May 17, 1:33 pm
US commerce secretary says export controls on Russia are working

Commerce Secretary Gina Raimondo told reporters Tuesday that the export controls the U.S. and other countries have put on Russia are working, including compliance from China.

“These export controls are having a strong and significant effect,” Raimondo said Tuesday.

Raimondo returned from Paris where she co-chaired the U.S.-EU Trade and Technology Council Ministerial Meeting. She said there was consensus and partnership amongst countries with respect to cutting off Russia’s access to “critical technologies.”

“We’ve had extensive discussions on export controls,” she said.

The Commerce Department and 37 other countries have limited semiconductor chips that can be exported to Russia, which help not only everyday Russian carmakers, but the Russian military build and use military equipment.

“You’ve all heard the anecdotal stories of Russia’s inability to continue to produce tanks and auto companies shutting down but overall U.S. exports to Russia have decreased over 80%, between February and a week ago,” she said. “So we essentially stopped sending high tech to Russia, which is what they need for their military.”

Even China, Raimondo said, stopped shipping tech products such as laptops to Russia by 40% compared to a year ago.

Asked whether she trusts the Chinese data, Raimondo said it is “consistent” with what the Ukrainians are seeing on the ground.

“We are not seeing systematic efforts by China to go around our export controls,” she said. “So yes, I think this is probably quite accurate.”

May 17, 9:20 am
Biden to meet with leaders of Sweden, Finland as they seek to join NATO

President Joe Biden will host Prime Minister Magdalena Andersson of Sweden and President Sauli Niinistö of Finland at the White House on Thursday as the two countries seek to join NATO, the White House announced Tuesday.

The three leaders will “discuss Finland’s and Sweden’s NATO applications and European security,” according to a statement from White House press secretary Karine Jean-Pierre.