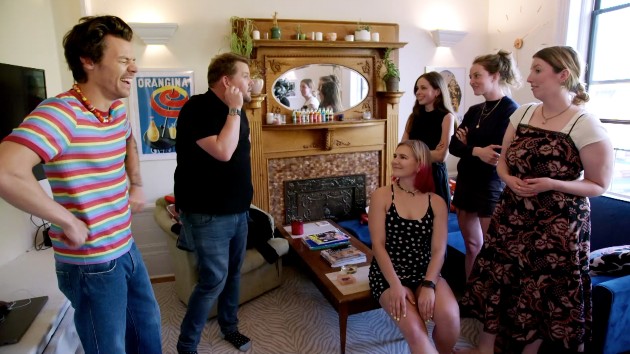 Harry Styles went the DIY route for his latest music video, with the help of James Corden.

In a segment for The Late Late Show Thursday night, Harry and James scoured a Brooklyn neighborhood for a random apartment in which to shoot the music video for “Daylight” in just three hours with a $300 budget.

After getting rejected a couple of times – “I’ve got to be honest, I thought your face would open a lot of doors,” James told Harry – the two hit the jackpot when they knocked on a door with four young female roommates who were more than obliging.

James then directed Harry in various scenes around the apartment, including one in the bathtub, a party scene and a rooftop scene with James dressed in a green-screen leotard.

“Should we just scrap it? Is it too late to do ‘Carpool Karaoke’?” Harry says to the camera at one point.

In the end, though, the finished product didn’t turn out half bad — and Harry gave four fans a day they’ll never forget.

‘Only Harry in the Building?’ Showrunner reveals dream guest star for season 3

Lauv releases “Kids Are Born Stars,” reveals song is about “getting back in touch” with younger self