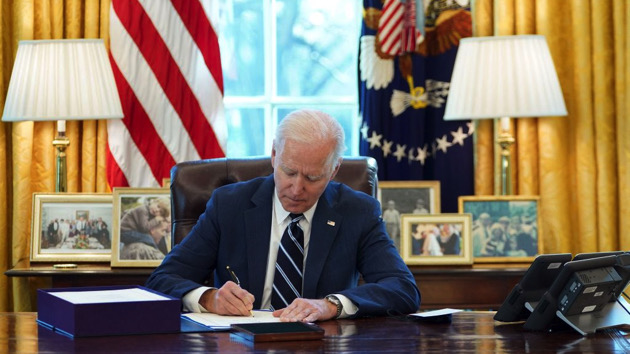 (WASHINGTON) — President Joe Biden on Wednesday sent a letter to seven major oil refiners blasting them for record profits amid the war in Ukraine as Americans pay record prices at the gas pump.

In the letter, he informs them he has ordered Secretary of Energy Jennifer Granholm to convene an emergency meeting with company executives to provide an explanation of any reduction in refining capacity since 2020.

While acknowledging that “Putin’s war of aggression” has dwindled the world supply of oil, Biden also pointed out that oil company profit margins are at the highest levels ever recorded.

“The last time the price of crude oil was about $120 per barrel, in March, the price of gas at the pump was $4.25 per gallon. Today, gas prices are 75 cents higher, and diesel prices are 90 cents higher. That difference — of more than 15% at the pump — is the result of the historically high profit margins for refining oil into gasoline, diesel and other refined products. Since the beginning of the year, refiners’ margins for refining gasoline and diesel have tripled, and are currently at their highest levels ever recorded,” Biden wrote.

Biden blames on the companies for “worsening” the pain the war has imposed on Americans.

“I understand that many factors contributed to the business decisions to reduce refinery capacity, which occurred before I took office. But at a time of war, refinery profit margins well above normal being passed directly onto American families are not acceptable. There is no question that Vladimir Putin is principally responsible for the intense financial pain the American people and their families are bearing. But amid a war that has raised gasoline prices more than $1.70 per gallon, historically high refinery profit margins are worsening that pain,” he wrote.

He hinted his administration is prepared to take action if the companies don’t boost production, although the consequences of not complying are not clear.

“I am prepared to use all tools at my disposal, as appropriate, to address barriers to providing Americans affordable, secure energy supply,” he wrote. “The crunch that families are facing deserves immediate action. Your companies need to work with my Administration to bring forward concrete, near-term solutions that address the crisis and respect the critical equities of energy workers and fence-line communities.”

Asked on CNN Wednesday morning what “tools” are at Biden’s disposal, Granholm did not answer directly, but said his use of the Defense Production Act in other contexts has been on the table and that Congress can also take a variety of actions to address the issue.

She said he first wants to hear from the companies why “we are seeing these massive profit-taking on the part of refiners.”

When pressed repeatedly if a proposal from Sen. Ron Wyden, an Oregon Democrat, to impose a 21% surtax on excess profits form the oil companies is something Biden would consider supporting, Granholm nervously said “no tool has been taken off the table” but did not directly say whether he’d back the idea.

“I’m saying no tool has been taken off the table and he wants to hear from the refineries, the companies who are doing refining to see what is the bottleneck and how we can increase supply. And he’s also asking, of course, for the oil and gas industry to increase supply as well, by drilling more.”

An industry group, The American Petroleum Institute, responded by trying to shift blame back to the White House, saying the administration’s “misguided policy” in reducing domestic oil and gas production has added to energy costs.

“While we appreciate the opportunity to open increased dialogue with the White House, the administration’s misguided policy agenda shifting away from domestic oil and natural gas has compounded inflationary pressures and added headwinds to companies’ daily efforts to meet growing energy needs while reducing emissions,” API President Mike Sommers said in a statement.

It urged the president to “prioritize unlocking U.S. energy resources” to reduce costs instead of increasing reliance on countries like Saudi Arabia.

Gas prices fall below $4 for first time since March

Labor Day sales to watch: Here’s what to know