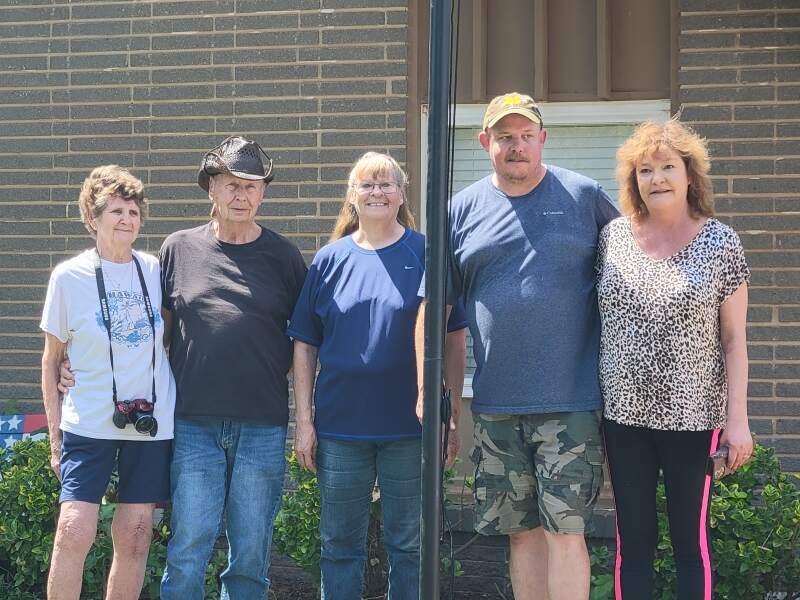 The day started off with about a dozen volunteers who met behind the Oakwood Mall in the parking lot, volunteers then assembled the flagpoles which had been ordered through amazon before loading them on a trailer.

A Waukomis police officer then provided a police escort for the volunteers to their 1st location of the day, the house of retired Air Force veteran Matt Bowling in Waukomis. Volunteers then struggled their way through tree roots digging the hole for the flagpole while the President of National Flagpoles Veterans United Kale Grauberger interviewed the veteran over Facebook live.

An American flag and an Airforce flag were then presented to the veteran The American flag was then raised to the top of the newly planted flagpole. Then a prayer was prayed followed by the pledge of allegiance. Next, the flag was taken down so the concrete holding the pole in place could dry.

The flag was then folded ceremonially 13 times while Grauberger explained what each fold represented. When Grau finished he then presented the flag to Bowling. Bowling later spoke with Enidlive about what the flagpole ceremony meant to him saying “unbelievable honor that these guys honor me with with a flagpole” and “The freedom that the flag represents”.

City of Enid to host 4th of Celebration at Meadowlake Park