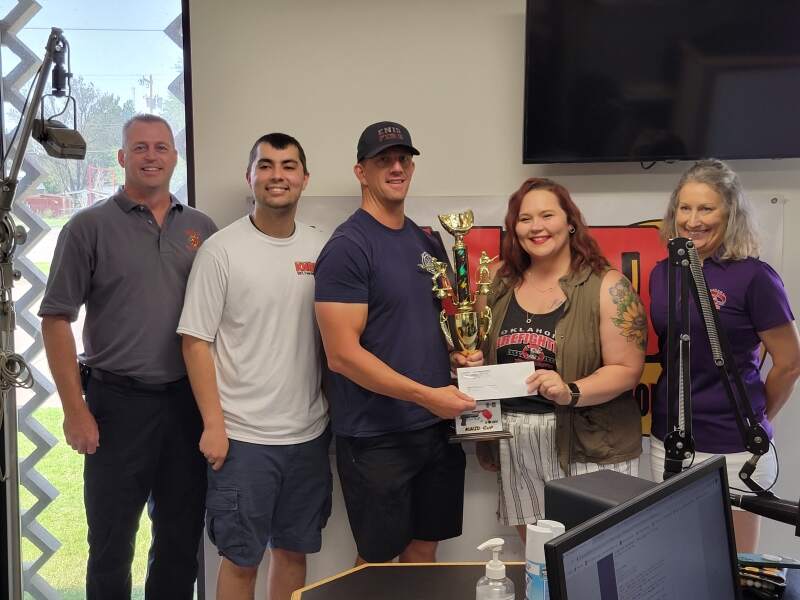 At the end of May, the Guns and Hoses Softball game kicked off the NJCAA Division 2 World Series on Friday night before the games began on Saturday. The softball game between the Enid Fire Department and the Enid Police Department resulted in an EFD 10-3 victory.

Enid Fire Department Union Head Cody Keller was in charge of picking the charity and he chose Oklahoma Firefighters Burn Camp as his charity of choice after putting it to a vote amongst the firefighters that played in the game. Keller said, “we have known about this camp for quite a while they talk about it quite a bit at the OSFA Convention, and it’s local so it’s something good to give your money to”.

The Firefighters Burn Camp Public Relations Director, Rachelle Goddard, and Kellers were in the KNID studio with Christian Katt to discuss the organization.

Goddard, who is a burn survivor herself, spoke about the impact that the camp has had on her life saying, “You make family there, I feel closer to a lot of them than I do my own family sometimes”.  Goddard also mentioned that the camp in Tahlequah OK at Frontier Cove is 100% free, and paid for completely by donations.

The camp is also run entirely by volunteers, with no one getting paid. Camp lasts for 5 days and is only for children that have been significantly burned or disfigured. Children who participate in the camp have a plethora of activities to enjoy including swimming, fishing, go-carts, an arcade, and more.

Anyone who knows a child burn survivor who they believe would be interested in the camp can call 918-698-8812 or email director@okffburncamp.com.

Both Enidlive and KNID are a part of Chisholm Trail Broadcasting.

Top Oklahoma Lawmakers React to Overturning of Roe vs Wade