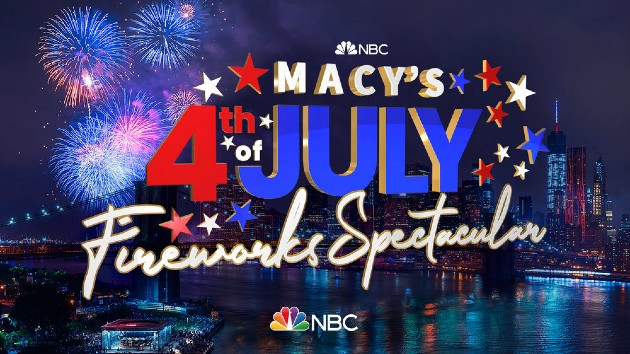 The artists who’ll be performing on this year’s installment of Macy’s 4th of July Fireworks® Spectacular have been revealed.

5 Seconds of Summer will rock out before the fireworks display. So will Pitbull, who’ll be performing with country singer Filmore: The two have a song coming out Friday called “USA.” Also performing are country stars Brett Eldredge and Carly Pearce, and Lin-Manuel Miranda and his Freestyle Love Supreme cast. The cast of Broadway’s Moulin Rouge! The Musical rounds out the bill.

Celebrity guests including Craig Ferguson, Padma Lakshmi, Paulina Porizkova and Wolfgang Puck will participate in segments called “The American Spirit,” talking about what it means to them to live in the U.S., since they were all born in other countries.

Meanwhile, the main event, the fireworks, will launch from five barges on New York City’s East River, and will include more than 48,000 shells and effects. The show starts at 8 p.m. ET on NBC and will stream on Peacock.  It’ll air again at 10 p.m. PT.

Demi Lovato teases their upcoming tour on ‘The Tonight Show’

Demi Lovato teases her upcoming tour on ‘The Tonight Show’

Harry Styles’ ‘Don’t Worry Darling’ co-star on those sex scenes: “It’s not why we do it”

Hootie & The Blowfish unveil return of Hootiefest: The Big Splash: “We had to make this a new annual tradition!”