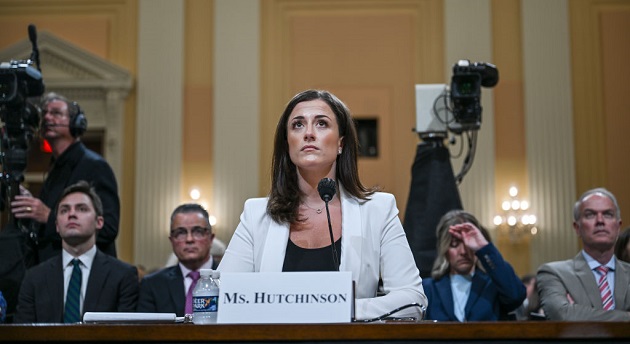 (WASHINGTON) — The House select committee investigating the Capitol attack is holding a surprise hearing Tuesday after saying it wouldn’t be holding more until the middle of July.

The committee said the focus would be on “recently obtained evidence.”

This is the sixth hearing this month on the attack on the U.S. Capitol and what the committee says was the plot by then-President Donald Trump and his allies to overturn the election.

Please check back for updates. All times Eastern.

Cassidy Hutchinson recalled a shocking story of Trump’s anger on Jan. 6 after being told he could not go to the Capitol to meet supporters following his “Save America” rally on the Ellipse — leading to Trump physically assaulting his security detail on the way back to the White House.

Hutchinson recalled the conversation she had back at the White House just after the rally with Bobby Engel, part of Trump’s security detail, who was “sitting in the chair, looking somewhat discombobulated,” and Tony Ornato.

“As the president had gotten into the vehicle with Bobby, he thought they were going out of the Capitol and when Bobby had relayed to him were not, ‘You don’t have the access to do it, is not secure, we’re going back to the West Wing.’ The president had a very strong, very angry response to that,” she recalled.

“Tony described him as being irate. The president said something to the effect of, ‘I’m the effing president, take me up to the Capitol now’ — to which Bobby responded, ‘Sir, we have to go back to the West Wing.’ The president reached up towards the front of the vehicle to grab at the steering wheel. Mr. Engel grabbed his arm, said, ‘Sir, you need to take your hand off the steering wheel. We’re going back to the West Wing. We’re not going to the Capitol."”

“Mr. Trump used his free hand to lunge towards Bobby Engel and when Mr. Ornado recounted the story to me, he motions towards his clavicle,” she said.

Hutchinson testified about the concerns some White House staff had about President Trump wanting to go to the Capitol with his supporters on Jan. 6. At one point that morning, Hutchinson said, then-White House counsel Pat Cippollone told her to make sure that it didn’t happen.

“We’re going to get charged with every crime imaginable if we go up to the Capitol,” Hutchinson said Cippollone told her.

Crimes they were concerned about, she said, included defrauding the electoral count and obstructing justice.

The White House legal team was also concerned about aspects of Trump’s remarks at the Ellipse, Hutchinson testified, and urged speechwriters not to include language about marching to the Capitol.

Hutchinson said there were “many discussions” the morning of Jan. 6 about the rhetoric Trump would use at the speech that ultimately preceded the riot.

Hutchinson testified that Eric Herschmann, a lawyer for Trump, said it would be “foolish to include language that had been included at the president’s request, which had lines along, to the effect of ‘fight for Trump, we’re going to march to the Capitol, I’ll be there with you, fight for me, fight for what we’re doing, fight for the movement,’ things about the vice president at the time too.”

“Both Mr. Herschmann and White House counsel’s office were urging the speechwriters to not include that language for legal concerns and also for the optics of what it could portray the president wanting to do that day,” Hutchinson said.

Trump at his speech ultimately said, “So let’s walk down Pennsylvania Avenue” to give “weak” Republicans the “pride and boldness that they need to take back our country.”

Jun 28, 1:51 pm
Trump ‘furious’ people with weapons couldn’t get into Jan.6 Ellipse rally: ‘They are not here to hurt me’

Cassidy Hutchinson recalled how Trump was “furious” with the crowd size of his “Save America” rally on the Ellipse on Jan. 6 and with aides who didn’t want to let in individuals in who had weapons, which officials said ranged from AR-15-style rifles to bear spray.

“I was in the vicinity of a conversation where I heard the president say, “‘I don’t care that they have weapons. They are not here to hurt me. Take the effing mags away. Let my people in,"” she recalled. “‘They can march to the Capitol after the rally is over."”

Vice chair Liz Cheney asked Americans to “reflect on that for a moment” and remember what Trump called on the crowd to do, knowing they were equipped with weapons and body armor.

Hutchinson described Meadows’ underwhelming reaction to learning about the list of weapons that people had in the rally crowd that morning — including knives, bear spray, guns and flagpoles with spears attached to them.

“I remember distinctly Mark not looking up from his phone,” Hutchinson said, noting it took Meadows a few moments to respond. When he did respond, he asked [security officials], “Alright, anything else?”

In previously taped deposition, Hutchinson told the committee it was accurate to say Meadows “did not act” on concerns of violence.

The bombshell information the committee is unfolding through Cassidy Hutchinson’s testimony is that the Trump administration and Trump himself knew about the potential for violence before Jan. 6.

“I recall hearing the word ‘Oath Keeper’ and hearing the word ‘Proud Boys’ closer to the planning of the January 6 rally when Mr. Giuliani would be around,” Hutchinson said in a taped deposition played by Vice Chair Rep. Liz Cheney.

Cheney then displayed a Capitol Police bulletin on Jan. 3 warning, “targets of the pro-Trump supporters are not necessarily the counter-protesters as they were previously, but rather Congress itself is the target on the 6th.”

Hutchinson also recalled receiving a call from then-national security adviser Robert O’Brien, after the Capitol Police bulletin, asking if he could speak with Meadows about the potential violence. She wasn’t sure if that call ever happened.

Hutchinson described Tuesday conversations she had with Rudy Giuliani and then-White House chief of staff Mark Meadows on Jan. 2, 2021 — four days before the attack on the U.S. Capitol.

When Hutchinson went to Meadows’ office to relay her discussion with Giuliani, Meadows told her: “There is a lot going on, Cass, I don’t know, things might get real, real bad on Jan. 6.”

“That evening was the first moment that I remember feeling scared and nervous for what could happen on Jan. 6,” Hutchinson testified. “I had a deeper concern with what was happening with the planning aspects.”

Introducing Hutchinson to the American people, Chairman Bennie Thompson asked Hutchinson to recall a typical day at the White House.

“When I moved over to the White House chief of staff’s office with Mr. Meadows, when he became the fourth chief of staff, it’s difficult to describe a typical day,” she said.

Thompson established through a series of questions how Hutchinson’s office was a five to 10-second walk from the Oval Office and that she regularly engaged with members of Congress and senior members of the Trump administration.

Vice chair Liz Cheney said Cassidy Hutchinson was in a “position to know a great deal about the happenings in the Trump White House.”

“Today, you will hear Ms. Hutchinson relate certain first-hand observations about President Trump’s conduct on Jan. 6,” Cheney said in her opening statement. “You will also hear new information regarding the actions and statements of Mr. Trump’s senior advisers that day, including his chief of staff Mark Meadows, and his White House counsel.”

Cheney said information will also be released on what Trump and members of the White House knew about the potential for violence on Jan. 6.

In brief opening remarks, he explained information that she had needed to be shared with the American people “immediately” and hailed her courage.

“In recent days, the select committee has obtained new information, dealing with what was going on in the White House on Jan. 6, and in the days prior. Specific, detailed information about what the former president and his top aides were doing and saying in those critical hours. Firsthand details of what transpired in the Office of the White House chief of staff,” Thompson said.

“It hasn’t always been easy to get that information, because the same people who drove the former president’s pressure campaign to overturn the election are now trying to cover up the truth about January 6. But thanks to the courage of certain individuals, the truth won’t be buried. The American people won’t be left in the dark,” he added. “Our witness today is Cassidy Hutchinson, she has embodied that courage.”

With the nature of the hearing coming up with little notice, signaling urgency for the committee, reporters and cameras swarmed the witness table inside the Cannon Office Building ahead of Cassidy Hutchinson taking her seat.

Hutchinson entered the hearing room at 1 p.m. with members of the Jan. 6 committee.

ABC News Chief Washington Correspondent Jon Karl said sources have told him the hearing will be “Big —and disturbing.”

“Just want to say how much admiration I have for the tremendous bravery Cassidy Hutchinson is displaying,” Matthews wrote on Twitter. “Even in the face of harassment and threats, she is choosing to put her country first and tell the truth.”

“This is what real courage, integrity, and patriotism looks like,” Matthews added.

Matthews resigned from her position in the Trump administration on Jan. 6 , stating she was “deeply disturbed” by what took place that day.

Cassidy Hutchinson hired a new attorney, Jody Hunt, earlier this month to represent her as the public Jan. 6 hearings began. Her agreement to testify publicly comes after months of negotiations between the committee and her counsel, sources told ABC News.

At the start of the Trump administration, Hunt served as chief of staff to then-Attorney General Jeff Sessions. He later became the head of the Department of Justice’s Civil Division.

A 2019 political science graduate of Virginia’s Christopher Newport University, Hutchinson was as an intern to House GOP Whip Steve Scalise, R-La., and Sen. Ted Cruz, R-Texas, in college before serving as a White House intern in 2018. After graduating, she joined the Trump White House Office of Legislative Affairs, before joining Meadows as an executive assistant, and later a special assistant to the president.

“I have set a personal goal to pursue a path of civic significance,” she told her alma mater in a 2018 interview after her White House internship.

Having already sat four separate times for closed-door depositions with the committee, Hutchinson has been featured in clips publicly displayed by the committee, including some in which she discussed members of Congress asking the White House for pardons.

The House select committee will convene Tuesday afternoon for a surprise public hearing, signaling apparent urgency among members to reveal further findings from their year-long inquiry.

The hearing, scheduled to begin at 1 p.m. ET, will see the committee “present recently obtained evidence and receive witness testimony,” the group said in a news release Monday.

Hutchinson is expected to put a voice to many of the internal White House interactions involving the events of Jan. 6 and offer significant insight into Meadows’ actions and interactions with Trump.