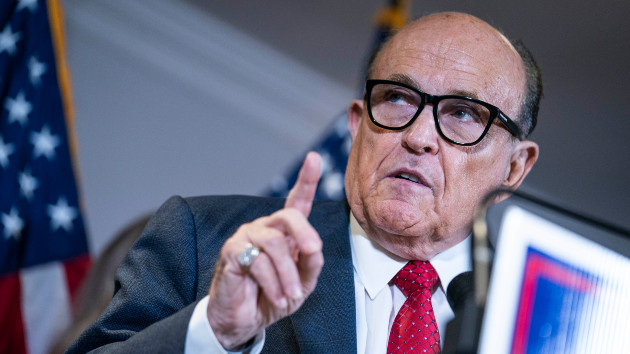 Sarah Silbiger for The Washington Post via Getty Images

(WASHINGTON) — Rudy Giuliani, the attorney for former President Donald Trump, is seeking to delay his court-ordered testimony before a Georgia grand jury probing efforts to overturn the 2020 election results in the state, according to new court filings.

Giuliani, who helped lead Trump’s legal fight as he unsuccessfully sought to overturn the results of the election nationwide, was set to appear before a Fulton County grand jury on Tuesday, according to a court order.

But Giuliani has sought to delay his testimony, according to court filings, claiming his doctor has not yet cleared him for travel after undergoing a medical procedure.

The Fulton County district attorney leading the probe opposed the delay, claiming that Giuliani had already traveled out of state since his surgery. Attorneys for Giuliani clarified they were referring specifically to air travel, to which the DA offered to “provide alternate transportation including bus or train if your client maintains that he is unable to fly,” according to an email correspondence filed in court.

A motion hearing has been scheduled for Tuesday afternoon in Fulton County Superior Court.

Lawyers for Giuliani said he is in “no way seeking to inappropriately delay” his testimony and “is and has been willing to cooperate in this matter subject to any ethical obligations that may preclude that cooperation.”

The testimony was set to come as the 18-month-old criminal investigation in Georgia appears to be ramping up.

Willis officially launched the investigation in February 2021, sparked in part by the Jan. 2, 2021, phone call Trump made to Georgia Secretary of State Brad Raffensperger in which he pleaded with Raffensperger to “find 11,780 votes,” the exact number Trump needed to win Georgia.

A special grand jury was seated in May 2022.

As part of his efforts to overturn the results of the election in Georgia, Giuliani appeared during a December 2020 hearing before state lawmakers at which he presented since-debunked allegations that poll workers had suitcases containing illegitimate ballots.

Graham, in the meantime, has been engaged in an ongoing legal fight to quash the subpoena he received last month as part of the investigation. A hearing in the matter is scheduled for Wednesday in the Northern District of Georgia.

Graham last week added Trump’s first White House counsel, Donald McGahn, to his legal team as he attempts to fight the subpoena, which identifies him as “necessary and material witness.”

As part of his argument to quash the subpoena, Graham says that he was acting “within [his] official legislative responsibilities” as a senator and chairman of the Judiciary Committee when he allegedly made calls to Georgia officials in the wake of the 2020 election.

During those calls to Raffensperger and others, Graham allegedly asked about “reexamining certain absentee ballots cast in Georgia in order to explore the possibility of a more favorable outcome for former President Donald Trump,” a Fulton County judge wrote in a filing in the case.