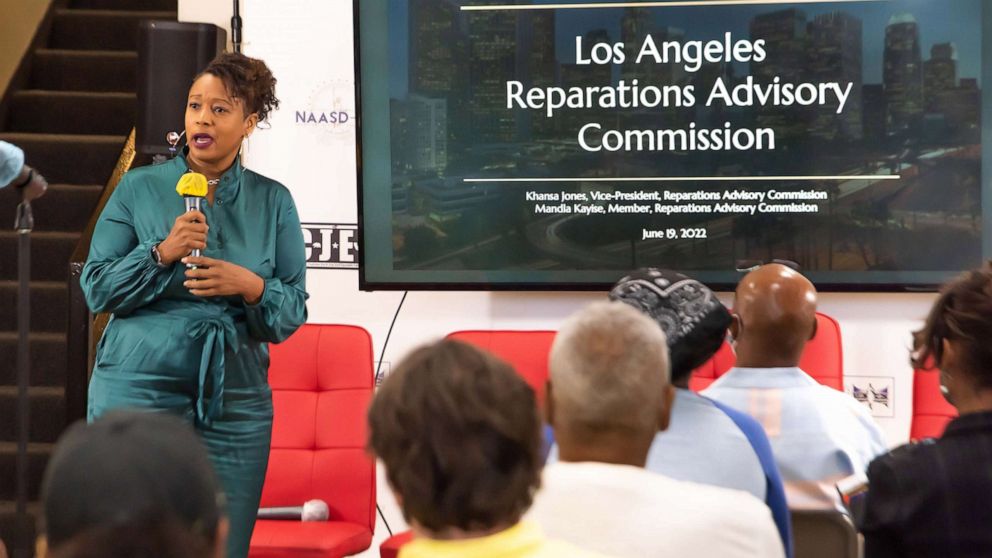 (SACRAMENTO, Calif.) — Two months after the California Reparations Task Force released its initial report detailing the state’s history of slavery and the ongoing impact of race-based discrimination, the state has launched a series of listening sessions in order to receive community feedback on the legislation.

On Friday, California residents who might be eligible to receive reparations from the state met at the offices of Black Women for Wellness in the Los Angeles neighborhood of Leimert Park to share their opinions on what reparations were needed.

“In my family we have been affected by eminent domain,” said Hawthorne, California, resident Ashley Lambey, 33, during the meeting Friday. “We haven’t been able to get anything in terms of what our parents left for us,” she said, referring to the right of the government to seize private property for public use.

“A lot of young kids don’t know about Jim Crow,” said Kathy Clark, 71, a resident of the Paramount/East Compton area who also attended the meeting. “I had to sit on the sidewalk; I couldn’t sit at the counter to eat my hot dog,” said Clark, recalling the days when state and local laws enforced racial segregation in the United States.

“There are so many tables that need to be overturned and reset,” said Donyell Smith, 53, a resident of San Diego who attended the meeting virtually. “Reparations is due in every single area.”

The meeting, one of dozens of sessions that will be held across the state this month, is part of a community engagement initiative run by the Bunche Center at UCLA and overseen by the state’s Reparations Task Force.

In 2020, state Assemblyman James Gallagher, who was one of twelve legislators to vote against the bill creating the California Reparations Task Force, told California Public Radio that “it’s like almost assuredly designed to be people from one party and probably from more of one perspective than the legislative process, which would include everybody.”

Gallagher also told California Public Radio that the issue of reparations for slavery should be determined by the federal government, echoing a common argument against municipal reparations programs.

In March, the task force voted to limit eligibility to descendants of free or enslaved Black people living in the U.S. before the 20th century.

The purpose of these sessions is to educate the public, increase community buy-in, and record residents’ testimonies in a report the task force can use when making recommendations to the state in its final report due July 2023. The task force released a nearly 500-page interim report in June.

At the community listening session on Friday, 20 attendees spoke about their families’ migration stories, the harm they suffered from the legacy of slavery and anti-Black racism, and what sorts of reparations programs they would like to see. They discussed how reparations could take the form of financial literacy training, mental health resources and political reform.

“The community has to lead,” Kamilah Moore, chair of the California Reparations Task Force, told ABC News. “Under international human rights law… the victim group or the community of eligibility should be leading the process for what reparations should look like.”

More than a dozen community listening sessions have already been held up and down the state, from Sacramento to San Diego, and they will continue to be held until September. “The point is to meet the community where they are at,” said Moore.

“I feel like we are making history, we are literally writing the script,” Chris Lodgson, an organizer with Coalition for a Just and Equitable California, one of the seven community organizations chosen to moderate the community listening sessions, told ABC News.

“I feel lucky, I feel blessed, I feel fortunate, I feel proud just to be a part of this history,” said Lodgson.