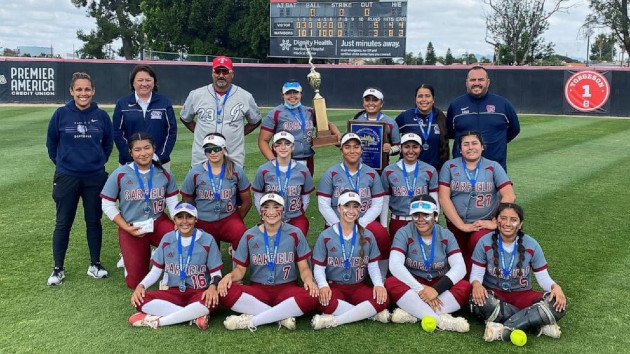 (LOS ANGELES) — It’s been a long time in the making — 27 years to be exact — but the girls’ softball team at James A. Garfield Senior High School in East Los Angeles brought home a championship trophy and plaque for the first time since 1995 earlier this summer.

If you were following the team this past spring, you would probably have never guessed that the Lady Bulldogs would come out on top. The victory was unexpected and a long shot because after all, they were on a losing streak and had lost all of their preseason games.

But Karla Bernal, the head softball coach and a physical education teacher at Garfield, never lost faith in her young players.

“It did start pretty rocky and it was really discouraging for our players because we did play a tough preseason game. We were playing top schools and schools that compete at a high level and unfortunately, we didn’t get any wins in our preseason and we went 0 and 7,” the 26-year-old coach told ABC News’ Good Morning America.

Bernal, who’s also a Garfield alumna herself, said she knew the team had talent and the potential to win. They just needed to put things into perspective and not get discouraged by their past record.

She recounted telling the high schoolers before the playoffs, “‘You know what? They seeded us 20 [out of 22]. No one expected us to actually make the playoffs so we have nothing to lose."”

“‘We just need to go in there, keep doing what we’ve been doing, that’s believing that we belong and believing that we can compete at this level, not letting our failures define who we are, and always putting our teammates first because when we do that, we are going to get the results out,"” she continued.

The Lady Bulldogs had a lot of challenges to overcome during their season, which ran from January to June. They had player injuries and morale issues to work through and then their big disadvantage was that they had no home field to play on as their field was under reconstruction.

“Some schools, they have their own field and you’re on your field, you’re in your batting cages if they have batting cages throughout the fall … from August to December. We didn’t have that. We were actually practicing in our football field, on our outdoor basketball courts, on our tennis courts,” Bernal explained.

“This team never had to face anything like that. And also, coming back from COVID, we [were] still transitioning from those obstacles and those struggles that they had to go through as a person. So it was hard for my team knowing that we couldn’t get field time,” she added.

Arnie Carrillo, whose two daughters were on the Garfield team this past season, put it simply.

“It seemed like everything that could go wrong, did go wrong,” he said.

Despite it all, the Lady Bulldogs kept practicing and squeezed in field time at nearby East Los Angeles College, which loaned their softball field to the teen players.

Their turning point came at their play-in game, which the Lady Bulldogs had to win in order to qualify for playoffs.

“I think the fact that the odds were against us, once playoffs started, it just lit something up for my team,” Bernal said. “I think they just started believing in their capability and their preparation and they just took off and represented our school really well.”

Garfield’s Bulldogs would go on to win 5-3 against the Panthers of Gardena High School, who at the time were the defending champions in the division.

One of Carrillo’s daughters, pitcher Nadia Carrillo, helped secure the Bulldogs’ victory by driving home the double runs that clinched their title.

For Carrillo, who like Bernal, is a Garfield alumnus, watching his two daughters thrive in softball has been especially meaningful. Back in 1995, he was in the stands watching Garfield win their championship and softball has become an important bond for the family.

“It comes back full circle with me being there in ’95. And then, in 2022, almost 30 years later,” Carrillo said. “My daughters are part of something beautiful as far as winning a championship for your community.”

Carrillo is now hosting an online fundraiser to get the Lady Bulldogs their well-deserved championship rings.

“It wasn’t an easy feat and so now, that puts us into trying to commemorate them with the rings, to have something that said, ‘You know what? I was a part of this program at this certain time of Garfield’s existence,"” he said.