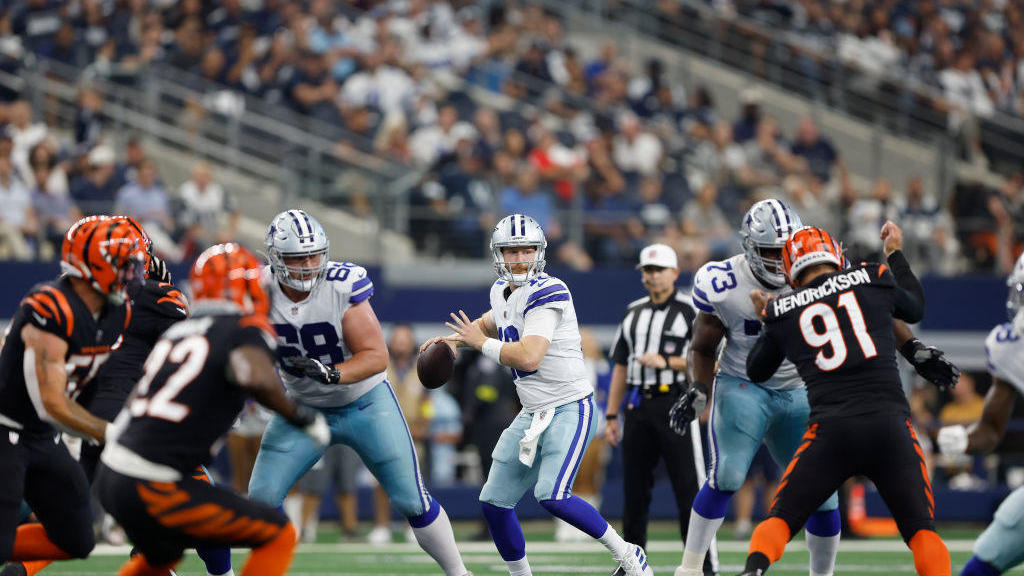 ARLINGTON, Texas (CBSDFW.COM/AP) — Brett Maher kicked a 50-yard field goal as time expired, and the Dallas Cowboys held on to beat the Cincinnati Bengals 20-17 on Sunday after losing a two-touchdown halftime lead.

Cowboys are yelling and chanting inside the lockerroom right now. What a win! pic.twitter.com/ukyCPCxdhg

Joe Burrow got the Bengals even at 17-17 by leading a 19-play, 89-yard drive in the fourth quarter, throwing a 5-yard touchdown pass to Tee Higgins and finding Tyler Boyd for the 2-point conversion.

After the Cowboys stopped the Bengals with about a minute remaining, Cooper Rush got the Cowboys in range for Maher to help Dallas win for the second time in his two career starts filling in for an injured Dak Prescott.

Rush got the winning drive going with a 12-yard completion to Noah Brown, who had his first career touchdown on the opening drive. A 10-yarder to CeeDee Lamb put the Cowboys (1-1) in range for Maher, who kicked a 54-yarder in the first half.

The defending AFC champion Bengals (0-2) erased the same 17-3 deficit in the opener against Pittsburgh, only to miss two chances to win on a PAT kick in the final seconds of regulation and a short field goal in overtime of the 23-20 loss. 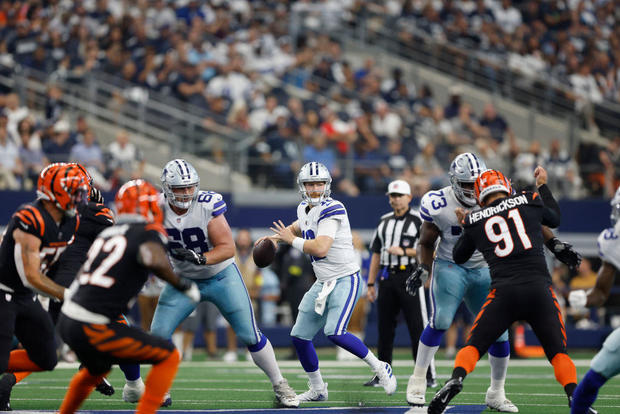 Cooper Rush #10 of the Dallas Cowboys looks to pass the ball against the Cincinnati Bengals during the first half at AT&T Stadium on September 18, 2022 in Arlington, Texas.

Rush directed 75-yard touchdown drives on the first two possessions for Dallas after the Cowboys went without a TD in the opener against Tampa Bay. The Cowboys didn’t find the end zone again, but didn’t need to on the final possession after Trevon Diggs stopped Boyd 2 yards short on third-and-3, forcing a punt with 1:09 remaining.

The Cowboys sacked Burrow six times in the first three quarters after he went down seven times in the opener against the Steelers. But the revamped offensive line protected him well to help the Bengals get even.

Burrow converted a fourth down with a completion to Ja’Marr Chase after three third-down conversions on a drive that consumed nearly nine minutes.

Tony Pollard had a 46-yard catch on a shovel pass, taking the ball from behind the line of scrimmage to just inches shy of the goal line on a play that was originally ruled at touchdown. He got the short carry for a 14-3 Dallas lead in the first quarter.

Rush is now 2-0 as an NFL starter, the other win coming when he threw the go-ahead touchdown in the final minute of a 20-16 victory at Minnesota. Prescott was out with a strained calf. The star quarterback will miss multiple weeks this time with a fracture near his right thumb.

The Bengals are the first defending AFC champion to start 0-2 since Denver was coming off consecutive Super Bowl victories and started 0-4 in 1999 after John Elway retired.

VIDEO BOARD REPLAY, OR NOT

At first, it appeared a punt had hit the bottom of the giant video board hanging over the center of the field for the second week in a row. Instead, a replay review determined the punt didn’t hit the board.

Dallas’ Bryan Anger was the punter, and all the players stayed on the field expecting a re-kick until the replay determined otherwise.

Tampa Bay’s Jake Camarda struck the board in the opener, and he ended up punting three times on the same sequence after a penalty on the second kick.

NFL Defensive Rookie of the Year Micah Parsons had two sacks along with Dorance Armstrong for Dallas. Parsons has at least two sacks in five of the first 18 games of his career, joining Mark Anderson, Joey Bosa, Elvis Dumervil, Clay Matthews and Aldon Smith among players with five such games among their first 20.

Bengals: TE Drew Sample was ruled out with a right knee injury after going down awkwardly on a tackle on a catch for a 4-yard loss in the second quarter. … WR Tee Higgins played after being listed as questionable with a concussion.

Cowboys: TE Dalton Schultz left late in the fourth quarter with an apparent right leg injury. He was holding and flexing the leg after an incompletion.

Bengals: At the New York Jets next Sunday. Cincinnati has lost 10 of its past 11 road games against the Jets.