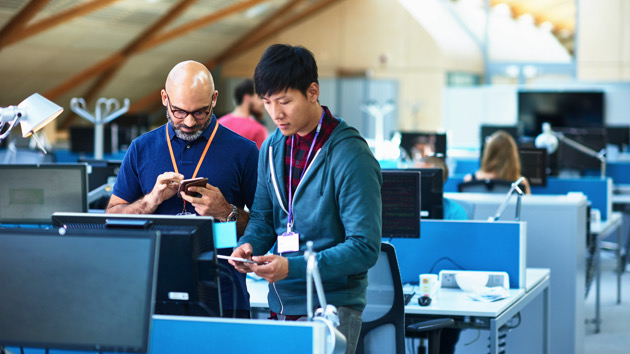 (NEW YORK) — A rude awakening for the tech industry this year has triggered a slew of layoffs at major companies.

Sales at top tech firms have retreated from the blistering pace attained during the pandemic, when billions across the world were forced into isolation. Customers stuck at home came to rely on delivery services like e-commerce and virtual connections formed through social media and videoconferencing.

However, persistent recession fears, rising interest rates and a shift back toward a pre-pandemic lifestyle have bludgeoned the industry.

The downturn has sent stocks tumbling and companies reeling. A slew of industry stalwarts have cut a combined tens of thousands of workers in an effort to slash costs.

Here are some of the tech companies that have imposed layoffs this year:

Meta CEO Mark Zuckerberg last week announced that the company would be laying off about 11,000 employees — an estimated 13% of its workforce.

Meta reported a second consecutive quarter of declining sales last month, as the company contends with a widespread drop in online ad spending and rising competition from TikTok. Shares of the company’s stock have plummeted about 65% this year.

“We’ve cut costs across our business, including scaling back budgets, reducing perks, and shrinking our real estate footprint,” Zuckerberg said.

“We’re restructuring teams to increase our efficiency. But these measures alone won’t bring our expenses in line with our revenue growth, so I’ve also made the hard decision to let people go,” he added.

Days after Elon Musk acquired Twitter, the company earlier this month began layoffs that will cut roughly half of its 7,500-person workforce.

“Today is your last working day at the company,” the company said in an email to employees, which ABC News has reviewed. The subject line read “Your Role at Twitter” and was sent to the personal email addresses of those laid off.

Those laid off will remain employed by Twitter and receive compensation and benefits until the first week of January 2023, though the date may vary for employees. Affected employees were already locked out of their Twitter systems, such as email and Slack.

Musk, who said he overpaid for the platform at the purchasing price of $44 billion, faces pressure to boost the company’s profits. Earlier this month, he said the company is losing $4 million each day.

Amazon is set to lay off about 10,000 workers, marking the largest job cuts in the company’s history and the latest employee losses in a battered tech industry, the New York Times reported on Monday. The layoffs could begin as early as this week.

The cuts amount to less than 1% of the company’s 1.5 million workers worldwide, but the job losses arrive at a time when the company typically expands its workforce during the busy holiday season.

The cuts will be concentrated in the Amazon department that specializes in devices, such as the voice-assisted Alexa, the Times reported. Jobs will also be lost in retail and human resources.

Shares in Amazon are down 18% this year. Third-quarter earnings released by Amazon last month fell short of analyst expectations for revenue, sending the stock down 13% in extended trading on the day of the announcement.

Rideshare company Lyft laid off about 700 workers or 13% of staff earlier this month, the company said in a memo to employees.

In the memo, co-founders Logan Green and John Zimmer attributed the job cuts to “a probable recession sometime in the next year” as well as inflation and an increase in rideshare insurance costs.

The company’s stock has fallen about 71% this year, more than double the decline in the tech-heavy Nasdaq index over that period.

Laid-off employees will receive 10 weeks of pay, health care coverage through next April and assistance landing elsewhere, among other benefits, the memo said.

Earlier this month, fintech company Stripe announced it would lay off 14% of its workforce or about 1,100 employees.

The company will pay departing employees 14 weeks of severance as well as their annual bonus for 2022, among other benefits, the memo added.

Online real estate broker Redfin laid off 862 workers or about 13% of its workforce last week, the company said in a financial filing.

The company has cut more than a quarter of its staff since April due to a housing downturn that the company expects to last through next year, the filing said.

An aggressive series of interest rate hikes from the Federal Reserve has sent mortgage rates soaring to a 20-year high last month, as the U.S. endures an ongoing slowdown in home sales and housing construction.

In an Investor Day presentation last month, CFO Amy Weaver said the company is seeking greater profitability, as it aims to reach a 25% operating margin by 2026.

The company’s stock has dropped about 38% this year.

While significant, the job losses affected less than one half of 1% of the company’s 221,000 employees worldwide.

“Like all companies, we evaluate our business priorities on a regular basis, and make structural adjustments accordingly,” the company told ABC News in a statement. “We will continue to invest in our business and hire in key growth areas in the year ahead.”

Online financial trading platform Robinhood announced in August that the company would lay off 23% of its workforce, following cuts in April that affected 9% of employees.

“We have seen additional deterioration of the macro environment, with inflation at 40-year highs accompanied by a broad crypto market crash,” CEO Vlad Tenev said in a blog post. This has further reduced customer trading activity and assets under custody.

Retail stock trading online soared amid pandemic-related stimulus payments in 2020 and 2021, but has waned this year as consumers face rising costs.

Cryptocurrency trading platform Coinbase in June laid off 1,100 workers or about 18% of full-time positions.

In a memo to employees, CEO and co-founder Brian Armstrong cited an apparent economic downturn and an anticipated decline in trading revenue.

“We appear to be entering a recession after a 10+ year economic boom,” he wrote.

The company cut about 60 additional workers in its recruiting and institutional onboarding departments last week, The Information reported.