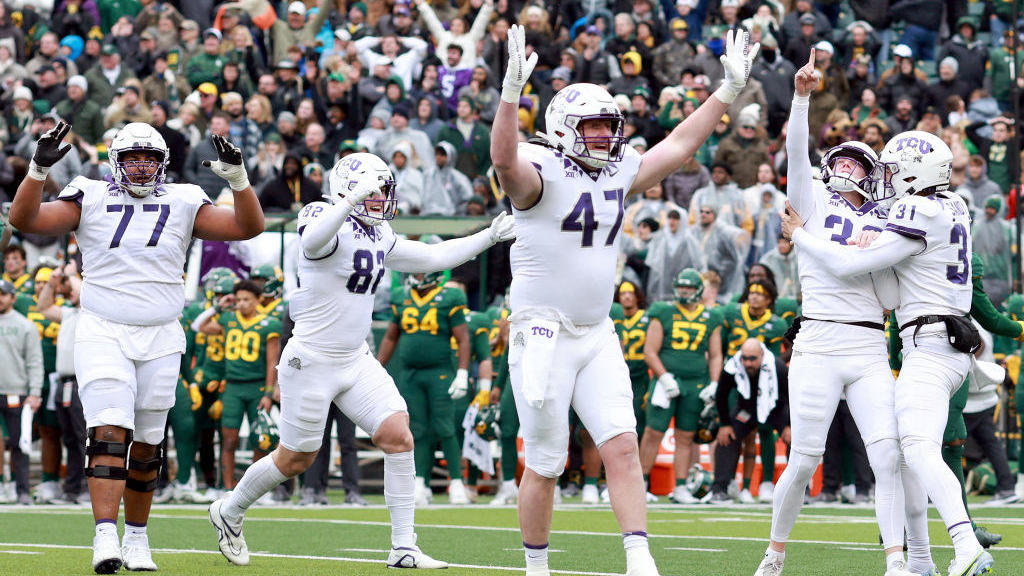 WACO, Texas (AP) — Griffin Kell kicked a 40-yard field goal on the final play of the game, and fourth-ranked TCU beat Baylor 29-28 on Saturday, scoring nine points in the final 2:07 to avoid another potential playoff-busting loss on the banks of the Brazos River. 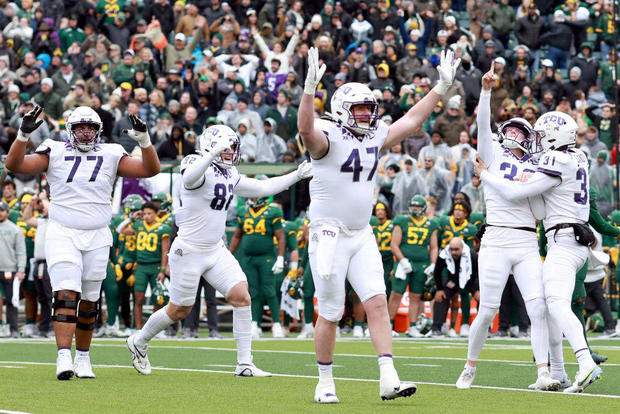 After kicking deep, TCU used all three of its timeouts while forcing a three-and-out, and got the ball back at its 31 with 1:34 left. Max Duggan converted one third down with a 12-yard run on a quarterback draw, and after Demercardo’s third-down run to the Baylor 23, the field goal unit scrambled onto the field with the clock running.

“That looked like chaos, but we practice it every Thursday exactly like that,” Frogs coach Sonny Dykes said.

The kick by Kell, who earlier had an extra-point attempt clank off the upright, went through as time ran out.

“The great thing about that last drive, we were throwing all of our day one concepts,” Duggan said. “We were throwing easy stuff that we practice and we can do with our eyes closed, and stuff that you believe in. … So just going out there, being confident, believing it was going to happen, and Griff makes a huge kick for us.”

TCU, which had already clinched a spot in the Big 12 championship game, hasn’t been undefeated this deep in a season since 2010, when it finished 13-0 with a Rose Bowl victory and No. 2 national ranking.

When the Frogs played at McLane Stadium for the first time in 2014, after the facility first opened, they lost 61-58. That was their only loss that season, and they went on to share the Big 12 title with Baylor. They were the first two teams left out of the inaugural four-team College Football Playoff.

“It’s a tough locker room. I told them that I wish that we, that I, could take the pain away,” Baylor coach Dave Aranda said.

Duggan finished 24-of-35 passing for 327 yards and a touchdown, and also ran for a score while leading the Frogs with 50 yards rushing on eight carries. Kendre Miller had a rushing TD in his 12th consecutive game, a 2-yarder early in the second quarter that tied it at 14.

TCU had its first lead when Duggan hit a wide-open Gunnar Henderson for a 26-yard touchdown with 5 1/2 minutes left in the third quarter, one play after the two had connected for 20 yards. It was 20-14 after Kell’s missed PAT.

“For it to end that way really hurt,” Williams said.

TCU: Another comeback for the Frogs, who last month overcame double-digit deficits in the second half against Oklahoma State and Kansas State. They had several players dealing with flu-like symptoms during the week. Leading receiver Quentin Johnston appeared to bang up his ankle again, and Miller got hurt early in the second half. Still, Duggan and the Frogs never faltered.

Baylor: The Bears never really had much trouble moving the ball, piling up 501 total yards, 232 on the ground. On their opening drive, they had 56 yards rushing — twice as much Texas had the whole game against TCU a week earlier. But they missed a chance to take a halftime lead when Shapen’s pass was intercepted in the end zone by Bud Clark with 4 seconds left.

TCU wraps up the regular season at home against Iowa State next Saturday.

Baylor plays at Texas on Friday.