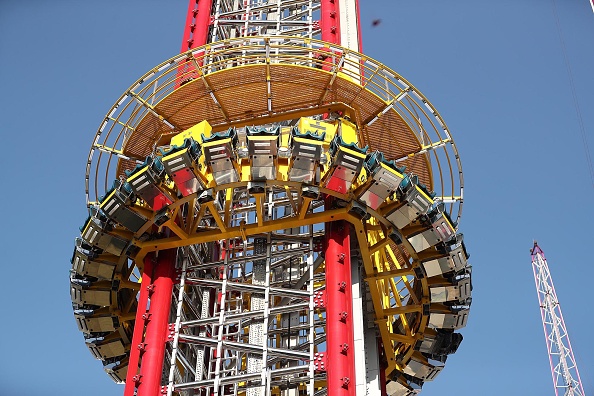 (ORLANDO) — Florida officials are seeking to fine an amusement park operator at least $250,000 over the death of a 14-year-old boy who fell from a drop-tower ride earlier this year.

The Florida Department of Agriculture and Consumer Services, which inspects amusement rides in the state, filed an administrative complaint Tuesday against Orlando Eagle Drop Slingshot LLC, the operator of the Orlando FreeFall ride, alleging multiple violations of state law.

Tyre Sampson, an eighth grader who visited ICON Park in Orlando with his football team on March 24, died from blunt force trauma after slipping out of his seat while on the ride.

The department’s investigation concluded that Tyre fell “due to the changes made” by the ride’s operator, Florida Department of Agriculture and Consumer Services Commissioner Nikki Fried said during a press briefing Tuesday.

Tyre was seated in one of two seats on the Orlando FreeFall ride where the harness proximity sensor was manually repositioned to allow for a larger restraint opening than the ride’s other seats, Fried said. The ride’s attendants were instructed to seat larger guests in those seats, according to the department’s complaint.

“Because his seat harness proximity sensor had been improperly adjusted, the ride was allowed to commence even though the ride was unsafe and led directly to his fall,” Fried said.

The investigation also found there was “minimal training” conducted on the 430-foot-tall ride and that neither the attendants nor the operator had read or seen the manufacturer’s manual, Fried said. The manual noted that the maximum weight for the drop-tower ride was 286 pounds; Tyre weighed approximately 383 pounds, according to the complaint.

The complaint alleges the operator violated several state statutes and rules requiring that amusement park rides be operated safely and that employees are adequately trained.

Fried said she has also instructed her staff to forward their findings to the Orange County Sheriff’s Office to consider criminal charges.

ABC News did not immediately receive a response seeking comment on the complaint’s allegations from Orlando Eagle Drop Slingshot.

The attorneys for Tyre’s parents called the complaint “a significant step toward full accountability.”

“This week, Tyre’s family will experience their first holiday season without him,” personal injury attorneys Ben Crump of Ben Crump Law and Bob Hilliard of Hilliard Martinez Gonzales said in a joint statement. “His family will always have an empty seat at the table — that anguish deserves accountability in the highest sense from the entities responsible for this tragedy.”

Sampson’s parents have filed a civil wrongful death lawsuit accusing ICON Park and other defendants, including the manufacturer and the operator of the FreeFall ride, of negligence.

In the wake of Tyre’s death, state Sen. Geraldine Thompson has proposed legislation to increase ride safety based on the department’s findings. The Tyre Sampson Law proposes an increase in inspections and required training, as well as expanded signage about patron requirements.

Thompson said during Tuesday’s press event that the “significant” fine “will put on notice” other amusement park ride operators “that there are consequences to not following the laws here in the state of Florida.”

The Orlando FreeFall ride has been closed since Tyre’s death. Now that the state’s investigation is complete, Thompson said she expects the ride to be removed.