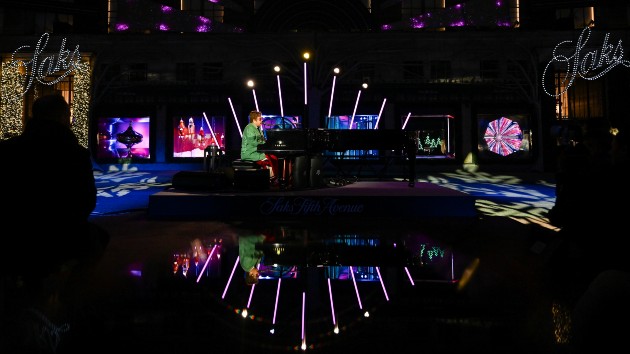 Elton John is a bi-coastal guy: Sunday night, he was rocking the crowd at LA’s Dodger Stadium on his Farewell Yellow Brick Road tour, and Tuesday night, he was singing in the middle of New York City’s Fifth Avenue.

That’s why Elton was the store’s special guest Tuesday night as Saks unveiled its famous holiday windows. Fifth Avenue was shut down as a grand piano was rolled out into the middle of the street, and Elton’s husband David Furnish and their sons Zachary and Elijah took their seats. Elton himself then appeared, sat down at the piano and thanked Saks CEO Marc Metrick for the million-dollar donation.

“This will help turbo charge our mission to end AIDS and it means a great deal to me to have your support –thank you so much,” said Elton. “I’m so thrilled to kick off the holiday season tonight and be a part of this spectacular and iconic window unveiling and light show.”

He then invited Metrick, David and the kids to join him for “the exciting part” — they counted down to the unveiling.

The entire front of the Saks building was then illuminated with a dazzling light show, as Elton performed his signature hit, “Your Song.”  Fireworks erupted from the top of the building, and even after Elton left, the display continued, soundtracked to Elton hits like “Step Into Christmas.”

You can watch the whole thing now at Saks Fifth Avenue’s website.

John Mellencamp has no desire to play the Super Bowl