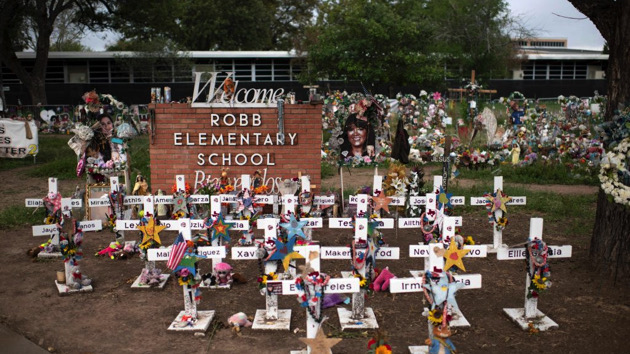 (UVALDE, Texas) — Last week, nearly six months after the mass shooting that killed 19 students and two teachers at Robb Elementary School in Uvalde, Texas, the Uvalde Together We Rise Fund began distributing more than $22 million directly to survivors, families and others affected by the tragedy.

The nonprofit National Compassion Fund, which has distributed donations in more than 50 other similar circumstances — most recently following the mass shooting that killed 10 people and injured three others in Buffalo, New York — did the difficult work of pooling resources from more than 13,000 donors, including local charities, online fundraisers and individuals, and determining who deserves money and how much.

“Donors say, ‘I don’t want to pick and choose,"” Jeffrey Dion, executive director of the National Compassion Fund, which manages the largest pool of Uvalde donations from public and private donors across the country, told ABC News. “‘Why should I help this family and not that family?’ Or ‘I don’t know all the families,’ or ‘Other families don’t have their own GoFundMe. But if I get this, I know I can help everybody."”

The National Compassion Fund is a partnership between the National Center for Victims of Crime and the survivors and families of others mass shootings — including Columbine, 9/11 and Sandy Hook. The group provides administration, accountability and transparency for money raised in the wake of such tragedies.

The Uvalde Together We Rise Fund began disbursements to its 448 eligible applicants on Nov. 15, the culmination of a months-long process that included two public hearings and multiple closed-door meetings led by a steering committee of 10 community members.

It was ultimately determined that eligibility for compensation would be separated into five tiers and based not on financial need but rather on the level of impact caused by the school massacre, determined by factors like proximity to the event and resulting psychological trauma.

“We have simply been stewards of these funds committed to honoring the intent of more than 13,000 gracious donors to help those directly impacted by this tragedy,” steering committee chair Mickey Gerdes wrote in a statement. “Although these donations could never make the survivors whole, we are hopeful these donations provide the recipients with some comfort knowing that there are many people who wanted to give something to help them in whatever way possible.”

Legal heirs of the 19 students and two teachers killed will receive the highest payments, followed by individuals with physical injuries based upon the number of days hospitalized and the amount of outpatient emergency and non-emergency medical treatment received in the month following the Robb Elementary shooting.

Other categories eligible for compensation include students and school workers who came under gunfire during the shooting and others who were present on campus that day who might be experiencing psychological trauma.

The National Compassion Fund will not disclose the exact monetary amount paid to each family or individual in order to protect victims’ privacy and safety. The group is also working with pro bono legal services to ensure that families who receive public assistance can accept payments without jeopardizing benefits available through government agencies.

One group that will not be receiving any funds: first responders.

It is standard practice, Dion explained, for the National Compassion Fund to exclude first responders because there are often local ordinances that prohibit public employees from receiving compensation or private gifts that arise from their public duties. He also noted that the fund is intended to help those who were there when the shooting started, not those who arrived at the scene later.

“The nature of trauma is that it catches a person unaware, without warning,” Dion told ABC News. “People who have any preparation for what they will encounter, even just a minute or two, are impacted differently.”

As survivors and families awaited the distribution of money from the Uvalde Together We Rise Fund, many sought assistance from other, smaller funds in the interim, including the Hope for Uvalde fund administered by the Uvalde Ministerial Alliance, the crisis relief fund organized by Uvalde’s city government, and, most notably, the state-funded Texas Crime Victims’ Compensation Program.

The latter, however, has been seemingly mired in controversy.

Immediately after the shooting, Texas Attorney General Ken Paxton urged victims’ families and survivors to apply for the state compensation program, which the state says is designed to “reimburse innocent victims for certain costs related to the crime.” The program reimburses anyone in Texas who’s been a victim of a crime, or is an authorized guardian of a crime victim, an amount up to $50,000.

But according to the Texas Attorney General’s Office, only $76,000 in total compensation has been reimbursed to 332 eligible applicants so far. Much of that sum — roughly $66,000 — was requested for loss of earnings, while roughly $7,300 was reimbursed for replacement of property seized as evidence of a crime scene, and roughly $3,000 was reimbursed for travel costs for families.

Texas Sen. Roland Gutierrez, a Democrat whose district includes Uvalde, told ABC News that multiple families and survivors have reported to him that they’ve faced difficulties filing claims and getting reimbursed through the state program.

He criticized the state’s evaluation process for being unnecessarily slow and onerous, and accused its leaders of placing “unreasonable obstacles” in front of grieving families.

“You’re dealing with poor people here,” Gutierrez said. “It shouldn’t have to be a situation where you’re out there demanding to get bills from people or to have people go through this paper, email process.”

Christina Mitchell Busbee, the local district attorney who has been helping families and survivors file claims, acknowledged some difficulties, but said her office has helped as many families as possible.

“There have been people that have had difficulty filling it out, but we have assisted as much as we can,” Busbee said. “Once it goes to the attorney general’s office, they then send a packet to these families or to the victims saying we need this from your employer, we need this from you, you may need additional documents … and some people have had difficulty in getting that, but a lot of people that have problems call my office, and we help them as much as we can or they can talk to the AGs office directly.”

In response to questions from ABC News, a representative for the attorney general’s office said the program is “committed to the long-term recovery of victims and families.” Under state law, victims have up to three years to submit receipts or claims for compensation, but can request a waiver to extend the deadline for good cause, especially regarding child victims, the attorney general office’s said. The office added that “many applications for compensation are inactive for long periods of time, but may be reopened upon any new request.”

The attorney general’s office also told ABC News that officials are still reviewing 29 pending cases, and to this point no applicant has been denied victim status.

However the office was unable to answer whether any specific claims or requests for reimbursement have been denied, saying the information is not tracked internally and would “require staff research and analysis.”

Representatives of the attorney general’s office did not comment on other specific questions regarding alleged difficulties with the compensation program.