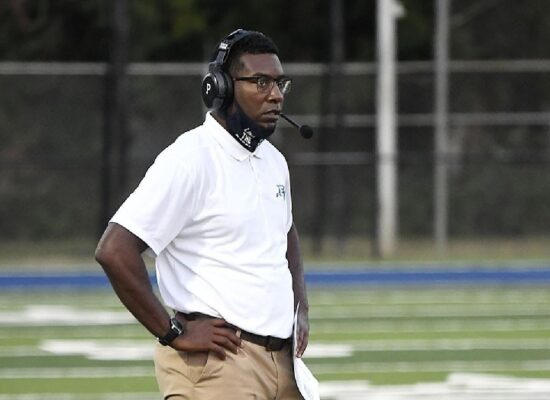 Football season is still a good 7 months away. However, when that time does finally come, there will be a new face walking the sidelines of D. Bruce Selby Stadium as head coach of the Enid Plainsmen.

For the last 4 seasons, head coach Rashaun Woods has been with the Enid Plainsmen and in those for 4 years…a lot has changed for the Plainsmen football program. In his 4 years as head coach, Woods helped turn the Enid football team around as they went from an 0-10 record to a 5-5 regular season and led the Plainsmen to their first playoff win since 2006. On top of that, his leadership and coaching led to 7 Plainsmen committing to play football at the next level with two of those players, Tykie Andrews and Luke Rauh, committing to play Division 1 college football.

In the press release, Coach Woods said, “I am thankful for the opportunity to work and coach for such a wonderful district and community here at Enid Public Schools. The administration, faculty, and parents have been nothing but supportive in its football program and coaching staff. The friendships that my family and I have made over the course of my time here will be the main thing above all that I will remember. I have given my very best to these young men and I pray it leads to future success.”

Coach Woods changed the culture of Enid football turning a winless team into a team that never went away. In their 5 regular season losses this past season, 4 of those games saw the Plainsmen within striking distance at the start of the 4th quarter against some of the toughest teams in the state of Oklahoma. The 4 games I’m referring to was their season opener against Muskogee (a team that would go undefeated during the regular season and has one of the best young QBs in the state), on the road at Jenks (one of the toughest places to play in the state), on the Road at Broken Arrow (a game where they led at the half), and on the road at Norman North (where the Plainsmen cut a 30+ point deficit to 10 early in the 4th). Even in their blowout losses to Bixby, this team never stopped competing and that’s all thanks to the man on the headset.

Enid Athletic Director Billy Tipps knows just how much Coach Woods meant to this program and it shows in his statement he made as part of the school’s press release, “We appreciate the work Coach Woods has put into the Plainsmen football program. We look forward to building on the successful groundwork he has laid, and we hope to press on to even greater achievements in the future.”

Woods will head to John Tyler High School where he hopes to continue his track record of turning programs around as he will lead the Lions who are coming off a 2-8 season and a program that has had 1 winning season in the last 4 years. Offensive Coordinator Cameron Condor will be appointed the interim head coach while the Plainsmen seek a replacement for Woods.