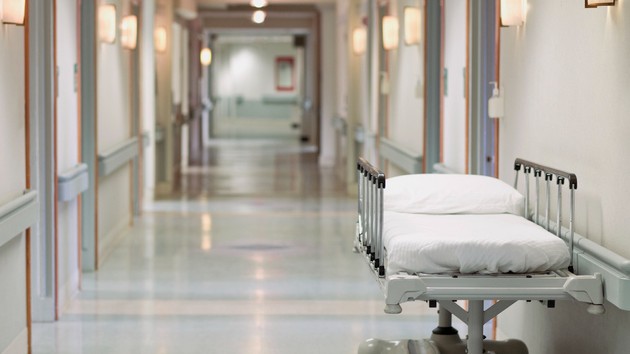 (IDAHO) — An Idaho woman who documented her 19-day miscarriage on social media said it was days before she could receive care due to the state’s strict abortion laws.

Carmen Broesder, 35, from Nampa — 20 miles west of Boise — a mother-of-one was just six weeks pregnant when she began miscarrying on Dec. 8. However, she said it took eight days before she was given any medicine to manage her pain and to expel embryonic tissue, and several more days for the miscarriage to end.

In a series of TikTok videos — along with medical records, photos and videos shared with ABC News — she said that despite bleeding heavily and suffering intense cramps, she was denied a dilation and curettage, or D&C, which removes tissue from inside the uterus, multiple times.

Because a D&C can also be used when providing abortion care, she told ABC News she believes it’s directly tied to Idaho’s abortion ban.

“Why should I get to death’s door to get help?” Broesder said. “I am prepared to be a mother. I am a mother and I wanted to have another baby. That is my story and it almost killed me.”

Different than other miscarriages

After Roe v. Wade was overturned by the Supreme Court last summer, Idaho passed a strict near-total abortion ban in August 2022 with only exceptions for rape, incest or if a pregnant person’s life is in danger.

Broesder said she wasn’t seeking an abortion when she went to the hospital the first time. She said she and her boyfriend had been trying to have a second child after the birth of her 16-month-old daughter, Lucy.

While trying to conceive, Broesder said she suffered other miscarriages, but she never experienced as much bleeding or as much pain as she did when she woke up on Thursday, Dec. 8.

“That was the most horrifying moment; I woke up and I had intense stomach pain,” she said. “I couldn’t stand up too much, and I go to the bathroom, and I was just bleeding. It was a horrific amount of blood loss where I instantly know this is not okay.”

After the bleeding wouldn’t stop with a 12-hour menstrual disc or with a super plus tampon, Broesder went to a local hospital. Broesder said she told staff she thought she was experiencing a miscarriage and after they checked her in, she said she waited for hours for someone to examine her.

She said staff eventually performed an ultrasound and confirmed there was no detectable heartbeat but, because she had an OBGYN appointment on Monday, Dec. 12, they advised her to attend as scheduled.

During the OBGYN appointment, Broesder said an ultrasound technician also confirmed the lack of a heartbeat and told her to come back for a follow-up in two days. ABC News reached out to the doctor’s office for a comment on their care for Broesder but did hear back.

‘I’m going to die before someone helps me’

Broesder said she felt like something still wasn’t right with this miscarriage. She was still bleeding heavily and in pain but did not receive any medication.

“I’m feeling like no one’s listening at this point,” she said. “These people are supposed to help. So, I went home and kind of just suffered through.”

Broesder said she felt like something still wasn’t right with this miscarriage. She was still bleeding heavily and in pain but did not receive any medication either from the ER or her OBGYN.

“I’m feeling like no one’s listening at this point,” she said. “These people are supposed to help. So, I went home and kind of just suffered through.”

However, the pain and the bleeding became so bad that Broesder went to the ER the next day, where she said she again waited for hours for someone to see her — and where she made her first TikTok video about her miscarriage, which went viral.

“I’ve been actively miscarrying since the 8th,” she said in the video, posted on Dec. 13. “I have gone to a doctor, and this is my second visit to the ER if you’re wondering why women’s rights matter. I’m just going to [expletive] bleed out on this table before somebody comes and actually helps me.”

She said that she asked twice for a D&C, including from her own OBGYN.

OBGYNs told ABC News the “save the mother’s life” exception of abortions bans — which Broesder may have qualified for in Idaho — is often vague and the language is unclear about what qualifies as a mother’s life being in danger, what the risk of death is, and how imminent death must be before a provider can act.

Providers also may be worried about providing miscarriage care because it could be misconstrued as providing abortion care, and they could face legal repercussions.

“That’s the optimal scenario, that doctors are able to provide the care that’s necessary and evidence-based,” Dr. Beverly Gray, an obstetrician and gynecologist at Duke Health in Durham, North Carolina, who was not involved in Broesder’s care, told ABC News. “I worry about other systems that are worried about how they could come under attack for taking care of a patient or could a doctor that’s caring for the patient be prosecuted in some way. I think these are real fears that people are facing.”

Broesder was told by the second hospital that she had a complete miscarriage and was given tranexamic acid, medicine that controls bleeding and helps prevent excessive blood loss, according to medical records reviewed by ABC News, and sent home.

The hospital network, answering on behalf of both hospitals Broesder visited, said that “due to federal and state privacy laws, we cannot confirm nor deny that this patient was seen at our facilities” but that it “provides such medical care as required under the Emergency Medical Treatment and Labor Act” when a pregnant woman suffers a medical emergency that requires the pregnancy to be terminated.

During this time, Broesder said she thought she was going to die.

Finally receiving care
By this time, her very first TikTok video had gone viral – the app shows it currently has more than 620,000 views – and she had been making more videos to keep those following her story updated.

She said many of her new followers told her to go to the ER again and, on Dec. 16, she decided to drive to St. Luke’s Boise Medical Center, where she was given a room and seen by a nurse.

Broesder said she requested a D&C and was denied again.

Dr. Frank Johnson, chief medical officer at St. Luke’s Health System covering Boise, Elmore and McCall, who did not treat Broesder but spoke about her case with ABC News, said “looking over this particular situation, there was no additional need for an interventional procedure by the time that she arrived here at St. Luke’s.”

So, I think in this particular case, medically appropriate care was provided to the patient,” he added.

While D&Cs are generally performed to terminate a pregnancy in the later stages, Dr. Saida Hader, an OBGYN at Rush University Medical Center in Chicago, told ABC News it can be provided if a patient is bleeding heavily in early pregnancy and miscarrying.

“D&Cs can be performed at any point in pregnancy, including early pregnancy and in the case of a miscarriage if someone is bleeding heavily,” she said, commenting in a general sense and not on Broesder’s care specifically. “What I will say, as a clinician, miscarriage is a very common occurrence in pregnancy and for patients that are clinically ‘less stable,’ which is what we call them when they’re bleeding a lot, the best course of action is a D&C and that is what you use to treat an early pregnancy in this situation.”

In an audio recording of the conversation Broesder had with the physician about why she couldn’t get a D&C, he said “there is some trepidation” about performing one in the wake of Idaho’s new abortion law.

“I felt like 50 pounds of bricks got lifted off my shoulders and got replaced with like 50 pounds of raging fire,” she said. “But I couldn’t do anything because this guy’s helping me so I’m not mad at him and it’s not his fault. I’m obviously mad at the law.”

Johnson did say, at St. Luke’s, doctors do sometimes have to consult with the legal team on cases to make sure they’re staying within the bounds of the law, although it’s not clear if this occurred in Broesder’s case.

“That’s been a new situation, really a necessity based on the ways that the laws are currently devised and written,” he said. “Traditionally, I think it is best when those conversations can occur between a physician, a woman and her family, and having to add the complexity of needing to figure out how to navigate a new law is an added challenge.”

Haider, who was not involved in Broesder’s care said the fear of criminalization and inability to provide care, even in situations where abortion providers might deem it necessary, might prevent them from acting.

“They might have initially acted sooner, they might have acted more aggressively to provide, taken more actions to intervene if they could have and by delaying that care, you’re putting the patients in a worse situation clinically and more at risk of bad outcome,” she told ABC News, speaking in a general sense.

Broesder said the doctor at St. Luke’s did discover part of the embryo was stuck in her cervix, so she received a procedure to remove part of the remaining tissue and was prescribed misoprostol, which treats postpartum bleeding, induces labor and causes an abortion.

From the day Broesder’s miscarriage started to when it ended, she said it was a total of 19 days of bleeding.

She said while she has been encouraged by the supportive comments and messages she has received on social media since her first video, she does not intend to try for another baby. She said the Idaho law worries her that if something similar happens, she could die due to fear from medical professionals about administering care.

She added, “I did not deserve to have to beg for my life for eight days and nobody else does either.”