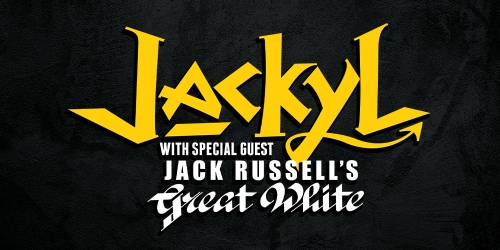 It’s been  30 years since Jackyl shot out of Georgia with its wild, untamed and uncouth approach to rock ‘n’ roll. Equal parts hard rock, heavy metal and Southern rock, Jackyl formed in 1991 and brought back rock ‘n’ roll back — back to its down-to-earth, wild, fun-loving origins. Full of spit and swagger — and a “dirty” sense of humor to boot — Jackyl quickly earned a deal with Geffen Records. Jackyl’s live shows were already legendary before the ink dried on the Geffen contract. Read Bio

Jack Russell’s Great White represents the next phase of his legacy.  On January 27, 2017 Frontiers Music Srl will lay the framework for this new phase with the release of “He Saw it Comin”. Rather than look backward and merely attempt to relive the multi-platinum Hard Rock entity’s storied origins, Jack Russell set his sights on the future. In December 2011, Jack Russell’s Great White first bared its teeth. Robby Lochner has been with Jack since its inception, they soon welcomed back longtime bassist and friend Tony Montana—this time as a guitar player and keyboardist— they then added drummer Dicki Fliszar, then bassist Dan McNay. This group has a sharp, soaring, eclectic, hook laden new album ready, boasting the bluesy hard rock stomp that made Russell and Montana icons in the first place.