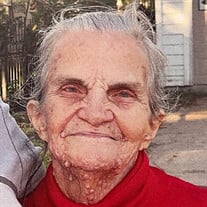 Billie A. Heffner was born December 16, 1935, to William Eagan and Althea Eckoles in Dewey, OK. Billie, named after her father, grew up in Bartlesville. She lived in Oklahoma, but later moved to California and then to Texas. In Texas, she met Hank Heffner, the love of her life. They were married and were together for 32 years.

In 2012, Billie was reunited with her son Michael DeBoard. After working for Sam’s Club in Houston for 23 years Billie retired and moved from Houston to be with her son in Enid. Billie had a huge spirit and never complained. She was little, but she was mighty.

Billie was preceded in death by her husband, Hank Heffner. Survived by her son Michael DeBoard, granddaughter RaeAnna Pankey and husband Brendon, and great-granddaughter Sophie Pankey.