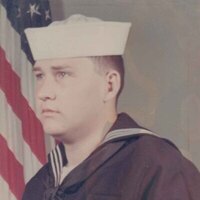 He was a proud Boy Scout and received the “God and Country” award in 1963. He enjoyed playing football and was a talented drummer at Earle High School, where he graduated in 1966. Bob then attended Northwest Mississippi Junior College on a band scholarship, where he met his future wife, Marilyn Mansfield.

Bob left college to serve his country in the United States Navy. On February 7, 1970, Bob and Marilyn were married in Norfolk, Virginia, where he was stationed at the time. He was honorably discharged in 1971. In 1981, Bob and Marilyn moved to Enid with their four children. He worked in the grain elevators for nine years before transitioning to St. Mary’s Hospital as a security guard. He worked his way up to head of Housekeeping. Marilyn preceded him in death on April 27, 1997.

Bob always had a dry sense of humor. He was an avid Sooner fan as well as a gun and John Wayne enthusiast.

Bob married Penny Bishop and moved to Hannibal, Missouri, where he became a school bus driver. He returned to Oklahoma in 2007, where he remained until his passing.