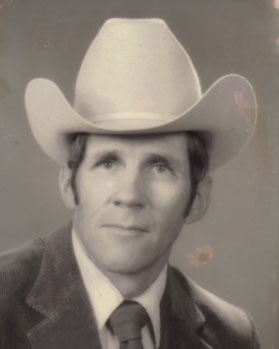 Boyd Lee Cline, 91 of Covington, Oklahoma was born on October 2,1931 to Sherill Alton Cline and Ella Darby Cline.  Boyd took over tending the cattle on a Thousand Hills for his Savior, on November 19th 2022 at his home in Covington, Oklahoma.
On November 23rd, 1950 Boyd married his life long partner and soul mate ,Marian Wagner.  To this union they had 4 sons, Gary,Randy,Kerry, and Ross.  Boyd and Marian were both graduates of Covington High School as well as their 4 boys and numerous grandchildren.
In school, Boyd played football and was an all star pitcher.  He was active in FFA and received his state FFA degree.  One of Boyd’s great accomplishments in life was his shorthorn steer that he got from Cleo Dupy.  He traveled by train showing that steer from Fort Worth to Kansas City to Chicago and everywhere in between.
Boyd was a lifelong farmer in Garfield Co.  At the peek of his farming career he managed about 4300 acres, tended 50 head of Herford cattle, and custom farmed for several local farmers as well.  Boyd and Marian were even recognized by Oklahoma Farm Bureau as Farm and Ranch Family of the year.
As a young boy Boyd fell in love with working the land.  When harvest was over they would custom cut into Nebraska and the Dakotas.  During the winter Boyd could be found picking up work to ensure that his family was provided for.  Everything ranging from oilfield work to laying carpet to working in the butcher shop and even driving a school bus.
Boyd and Marian have been a staple of the Covington community for nearly a century.  He was an active member of the Covington Lions Club where he was inducted into the Melvin Jones Fellowship, served on the Douglas COOP board, including a long stint as president. Boyd was an active member of the Garfield County Farm Bureau, and an avid supporter of the Covington Douglas Wildcats.
Boyd and Marian were longstanding members of the Covington christian Church where he served as an elder and played an integral role when the church closed its doors,transferring the building to Covington First Baptist Church to be used for its children’s ministry.  While it was tough to close the doors, Boyd found peace in knowing the ministry would still take place there.
They opened their home to foreign exchange students and served as foster parents over the years.  Family was everything to Boyd.  He loved fiercely but expected hard work, determination and responsibility from those whom he loved.  He enjoyed snow skiing, pulling taffy, playing cards, singing hymns on his karaoke machine, square dancing for nearly 50 years in Lucien. Also cheering on his Oklahoma State Cowboys.  He especially enjoyed supporting his grandchildren in all activities that they participated in.
Boyd is preceded in death by his parents, Shirell and Ella Cline.  1 sister, Barbara Carter, and 3 brothers-in-law, Tom Pursley and Lester Carter, and Roy Wagner and 1 sister in law, Wilma Blood.
Boyd is survived by his wife, Marian, of the home.
2 sisters, Shirellene Pursley and Beverly and husband Joe Kegin all of Crescent, Oklahoma. Also, 1 brother-in-law, Earle and wife Margaret of Oklahoma City.
Boyd’s four sons, Gary Cline, who is their full-time caregiver in the home, Randy Cline and wife Carolyn of rural Marshall, Oklahoma on the family homestead, Kerry Cline and wife Linda of Perry Oklahoma, and Ross Cline and wife Christy of Blackwell, Oklahoma.
13 grandchildren, 17 great grandchildren and 1 great, great grandchild.