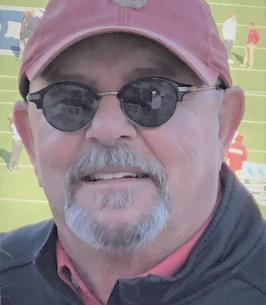 Bruce Lynn Simon was the son of Albert E. and Margaret Simon and was born in Enid, OK on April 24th 1954. He grew up an Air Force brat and lived in many different places which afforded him the opportunity to experience many different cultures. One of those was attending San Jose Mission in San Antonio, Texas and never forgetting the Nuns rushing onto the playground to deliver the tragic news regarding President JFK. Another experience was serving as an altar boy for a priest in Mildenhall, England who later became a Cardinal.

Growing up Bruce really enjoyed sports, especially baseball, because he was ambidextrous. He and his teammates in England made it to the UK Little League World Series. Later in life Bruce had a passion for and became an avid golfer. He especially enjoyed playing golf with people from all walks of life.

Bruce attended several different schools in England and Texas before returning to Oklahoma. He graduated from Drummond High School in 1972 where he served as the class President. Bruce graduated from Insurance School in Commerce, Texas in 1980 and earned his Certified Insurance Counselor designation in 1982. Before retiring he logged more than 400 hours of CIC training.

Bruce began his career with Bell Telephone followed by working for Farmland Insurance. He began his long-lasting career with Triangle Insurance in 1979. He served as the Vice President of Marketing for the majority of his 30-year career, retiring in 2012. Bruce loved this organization and had a tremendous passion for the cooperative system. He played a huge role in developing Triangle’s company culture, which is still enjoyed to this day. Whether good news or bad news, Bruce’s way of “shooting it to you straight” gained him respect from his customers and his co-workers. In fact, during his tenure with Triangle, he worked under five of the companies 7 presidents and CEO’s. It is possible he was known even more for his witty persona. When asked about memorable experiences working with Bruce responses echoed each other; it did not matter the instance, he made work fun and rewarding.

A Private Graveside for the family will be Friday at Memorial Park Cemetery. A reception for the family and friends will be held at the Groendyke Lodge at 2:30 pm Friday. Arrangements are under the direction of Ladusau-Evans Funeral Home.